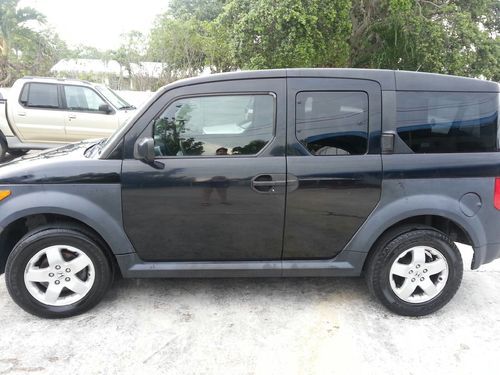 NOT 1 OR 2 BUT 3 NON PAYING  BUYERS OR BIDDERS HAVE FORCED ME TO LIST THIS CAR IN A BUY IT NOW OR MAKE OFFER BECAUSE I HAVE HAD IT WITH THE AUCTION PROCESS. THIS 2005 HONDA ELEMENT IS SUPER CLEAN INSIDE AND OUT. MANY NEW PARTS WHICH INCLUDE A NEW RADIATOR, BELTS, HOSES, AIR FILTER AND FRESH FLUIDS, ANTIFREEZE, OIL AND FILTER. IT RUNS LIKE NEW AND HAS NO ISSUES. THE BODY IS STRAIGHT AND THE MOTOR AND TRANSMISSION ARE SMOOTH AND TROUBLE FREE. WHEN I FIRST LISTED THIS CAR ON EBAY THE AUCTION WAS CANCELLED BY EBAY BECAUSE THEY SAID THAT THE CAR HAD REBUILT HISTORY, BUT BECAUSE I HAD LISTED THE TITLE AS CLEAN, THEY SAID IT DIDN'T MATCH. AS A RESULT, I HAVE TO LIST THE CAR AS REBUILT BUT I HAVE A CLEAN, CLEAR TITLE RECENTLY ISSUED BY THE FLORIDA DMV. I HAVE INCLUDED IN THE PHOTOS A COPY OF IT SO YOU CAN SEE. THE CAR DOES NOT HAVE SIGNS THAT IT WAS DAMAGED AND DRIVES AND TRACKS STRAIGHT. POWER WINDOWS, LOCKS, MIRRORS, CRUISE CONTROL, ELECTRIC OVERDRIVE, CD STEREO AND ALLOY WHEELS. WITH ONLY 77K THIS HAS MANY MILES AHEAD OF IT. PLEASE CALL 561-318-0010 OR EMAIL ANY QUESTIONS.