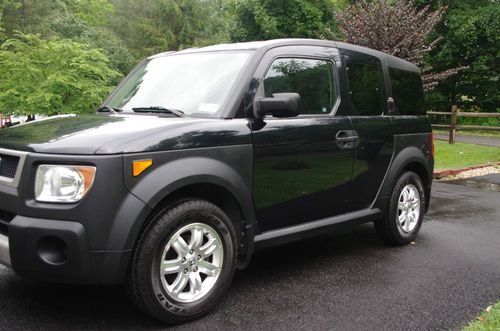 2006 HONDA ELEMENT EX,  AWD,  ONE OWNER !!  LOW MILES - 99,739.  VERY WELL MAINTAINED.  RUNS, DRIVES AND SHIFTS LIKE NEW, AFTER ALL, IT IS A "HONDA". BRAND NEW GOODYEAR TRACKER 2 TIRES WITH LESS THAN 5K MILES ON THEM.  THIS VEHICLE'S EXTERIOR IS IN EXCELLENT CONDITION WITH ONLY A COUPLE MINOR SCRATCHES.  NO DENTS, NO RUST.  THE INTERIOR IS ALSO IN EXCELLENT CONDITION WITH THE ONLY IMPERFECTION IS THE DRIVER SEAT WHICH HAS SOME CRACKING AND ONE SMALL HOLE (SEE PIC).  IT HAS JUST BE OUT BY THE LOCAL HONDA DEALERSHIP.  THEY CHANGED THE OIL AND ALL FLUIDS JUST LAST WEEK.  ALL POWER EQUIPMENT, WINDOWS, LOCKS, A/C (VERY COLD), STEREO, AND ETC, WORKS AS IT SHOULD.  IT ALSO HAS A REMOVABLE SUN ROOF, WITH STORAGE BAG, WHICH AS NEVER BEEN OUT OF THE PACKAGE.  THERE'S NOT A BETTER ELEMENT OUT THERE.  FEEL FREE TO COME BY, TEST DRIVE IT AND CHECK IT OUT.  I MAY CONSIDER A QUICK "BUY IT NOW" OFFER AND END THE AUCTION.  JUST CONTACT ME.
LOW STARTING BID, WITH A LOW, REASONABLE RESERVE.  CHECK IT OUT ON KBB.COM.  PRIVATE PARTY VALUE OF OVER $10,000.
ANYONE WITH LESS THAN A "10" FEEDBACK , PLEASE CONTACT ME BEFORE BIDDING.  A NON-REFUNDABLE DEPOSIT OF $500 IS DUE WITHIN 48 HOURS OF THE AUCTIONS END, WITH THE REMAINDER DUE WITHIN 7 DAYS OF THE END.  WINNING BIDDER IS RESPONSIBLE FOR THE SHIPPING OR PICKUP OF THE VEHICLE.
DON'T HESITATE TO CONTACT ME WITH AN QUESTIONS THAT YOU MIGHT HAVE.
THANKS FOR LOOKING AND GOOD LUCK!!!!!!!