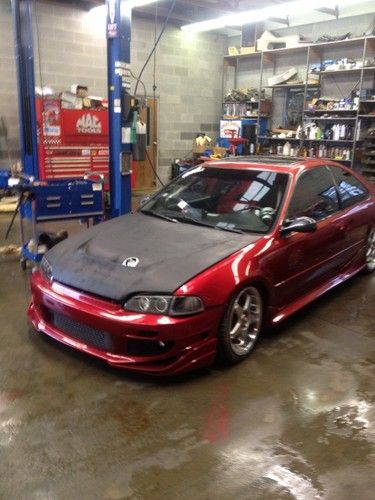 This is a built civic turbo.

JE pistons, Head ported and polished, VVT,  aluminum radiator, racing seats and harnesses, boost retarder adjustments, not sure of all components but

has been done right, very tight and clean. Bigger brakes, coil overs, almost nothing stock on this car, paint is flawless

with ghost flames. Must see!  Im leaving alot out. Body has 121000 miles and motor has way less!!

Car is for sale locally and reserve right to end auction anytime.

Psst! Remember late last month when we showed you those Japanese magazine scans purporting to show the next Honda Fit? The ones with the markedly more aggressive snout and Cuisinart-blade alloys? Yup, they were the real deal, but they weren't the standard model, they were images of the new Hybrid. We know this because Honda has just released a handful of images and some details on its forthcoming gas-electric hatchback, and the images line up perfectly.
The big story for the third-generation Fit Hybrid will be the fuel economy, naturally. Honda says it has achieved economy ratings of 36.4 kilometers per liter - 86 miles per gallon - on its home-market cycle, highest among all hybrid models in Japan and a 35-percent improvement over the current Fit Hybrid, a model not sold in the US.
Honda says it has achieved economy ratings of 86 mpg on its home-market cycle.