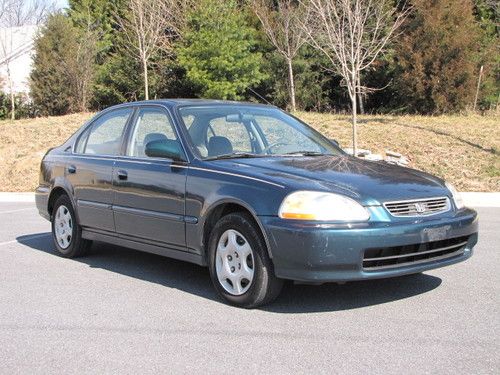 We have 1998 Honda civic EX up for auction, sold to the highest bidder. This civic has 198,621 miles on it. It runs and drives excellent. The drivetrain is solid, motor sounds good, and the transmission is shifting smoothly through all the gears. It has 4 matching tires with nearly new tread remaining. No overheating issues. Brakes and steering are solid. The body is in pretty decent shape, there are some dents on the driver side front fender and rear passenger door. You can see these in the photos. it has some clear coat damage on the roof and hood. The interior is complete and clean. The gear selector is missing, but it still functions 100%. All power features are working. This honda is ready to be put to use. Make sure to look at the photos, they clearly show the physical condition of the vehicle. Pleae ask any questions you may have and good luck

selling AS-IS/WHERE-IS, with NO warrenties. You are buying a used vehicle, all vehicles will eventually need some maintenace work. We are, and have tried to describe the car to the best of our ablity as it sits right now mechanically and apperance wise. if we missed something that you feel is important or you would like to know please ask a question.

Winning bidders, we are serious about selling this car. Please get in touch with us within 24 hours of auction end. We will provide our contact information to the winning bidder. No contact and we will relist the car. We reserve the right to cancel the sale/bids or relist at anytime.

The car needs to be picked up and payed for within 5 calender days of auction end unless other arrangements are made with us. We will take a deposit to secure the vehicle and hold it you need more time to make your pickup arrangments. There is a $150 fee on all sales for administrative cost. All checks will be held for 10 days to clear bank before any part of the item is released to buyer.