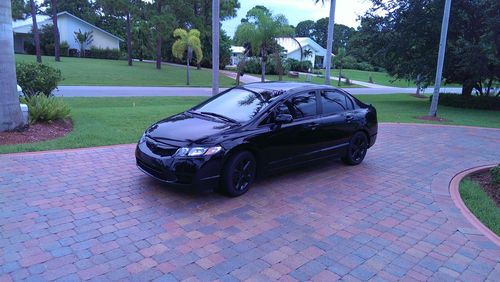 Condition: UsedA vehicle is considered used if it has been registered and issued a title. Used vehicles have had at least one previous owner. The condition of the exterior, interior and engine can vary depending on the vehicle's history. See the seller's listing for full details and description of any imperfections.Seller Notes:"the only defect is a small dime sized ding on L/s rear door from another door opening into it"

I AM LISTING THIS VEHICLE FOR MY SON.  YOU ARE LOOKING AT A 2011 HONDA CIVIC LX-S STEALTH EDITION. THIS VEHICLE WAS PURCHASED BY MY SON NEW IN 2011 AND WAS A SPECIAL EDITION SENT OUT BY THE DEALER TO BE CUSTOMIZED.  THE WINDOWS WERE TINTED THE FACTORY WHEELS WERE PAINTED BLACK AND ALL CHROME ACCESSORIES WERE COVERED WITH BLACK VINYL.  THIS VEHICLE IS IN BEAUTIFUL CONDITION, IT HAS ONE SMALL DING ON THE LFT REAR DOOR ABOUT THE SIZE OF A DIME FROM ANOTHER CAR DOOR.  THE VEHICLE RUNS AND DRIVES PERFECTLY.  HE HAS THREE CHILDREN AND HAS GROWN OUT OF THE VEHICLE.  THE CAR HAS NEW TIRES, BRAKES AND ROTORS.  THE CAR IS COVERED BY FULL MANUFACTURERS WARRANTY UP TO 60,000 MILES POWERTRAIN.  PLEASE DO NOT BID IF YOU HAVE ZERO OR NEGATIVE FEEDBACK UNLESS YOU EMAIL OR CONTACT ME FIRST.  THE BIDDING WILL START @ 12,800 WITH A BUY IT NOW OF 14,300.  THESE VEHICLES ARE SELLING ANYWHERE FROM 15,000 TO 17,000.  I AM ALSO OPEN TO ENDING THE AUCTION EARLY FOR THE RIGHT PRICE. ONCE PAYMENT IS MADE TO MY SON HE WILL PAY OFF HONDA MOTORS TO RECEIVE THE TITLE AT THAT POINT THE TITLE WILL BE SENT TO THE BUYER. WE CAN HELP FIND A SHIPPER, OR YOU CAN FLY INTO WEST PALM BEACH WE WILL PICK YOU UP AT THE AIRPORT AND YOU CAN DRIVE THE CAR HOME.   THIS CAR IS FULLY SERVICED AND READY TO DRIVE ANYWHERE.  PLEASE REVIEW MY FEEDBACK AND BID WITH CONFIDENCE.  YOU CAN ALSO CALL MY SON WITH ANY QUESTION. YOU CAN CONTACT HIM @ 772-215-0040 LOUIS.