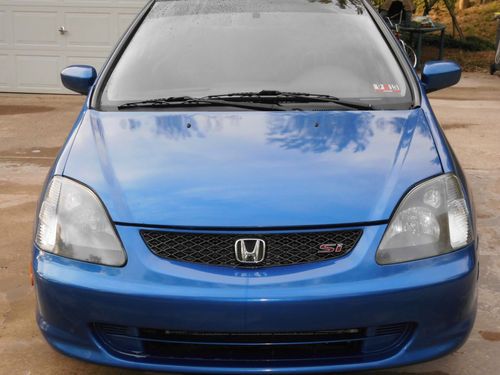 2005 hONDA Civic si hatchback,not quite 70,100 miles. I drive this car daily.Now i would like to tell you the story of this car.I bought this car in 2009 knowing it had been wrecked/salvage. Figured a few thousand dollars and i would have a great little car. Boy was i ever wrong 6000.00 for paint and bodywork because it was mangled and a mess,had to replace sub frame&control arms,ailiment another 1000$Something was still not right so i had the car raised to its original heigth and don't quote me cause i can"t find the reciepts for this but I believe i replaced shocks and struts.A few more months went by and motor blew [not due to punk driving] so i had it replaced ,Its been 80-300$ every few months. Feb this year the clutch come out and busted the transmission so i had the transmission,clutch plate,pressure plate,throw out bearings replaced 2368$..In March i had to have coils replaced.Thought I was going to make it by April ok but a darn herd of deer jumped out and i was trying to dodge them so now there is damage to the drivers side back fender.I am broke and if i were a boy/man i would pee on the tire ha! ha! Just that sick of going to the garage for repairs. The glove compartment is missing ,there is some burn holes in the seats,missing a reflector,and needs something on the passenger side inside door maybe just a pull handle not sure but door works fine..ac,sunroof,cd player works  but i will not gurantee tomorrow. The little car will fly,all of my miles are highway miles.Does not leak anything. I feel this car is evil and i will not warranty it,it is a as-is sale I am broke and done with it.Some of the pieces have been hard to get would be a great car to sell for parts. Feel free to call 304-541-9832 after 8 p.m