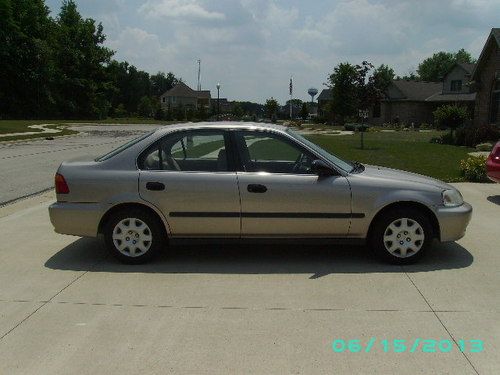 I have a 2000 Honda Civic LX car for sale-it is in very good condition-as you can see in the pics! Runs and drives great-no oil leaks-good on gas mileage-new windshield and battery. It has high miles-but not high for a Honda-plenty of life left in the ole girl!! Interior-no rips or tears-has good radio and Cd player-air and heat works great-good tires and brakes-it does have a paint chip-lower left rear fender and small dent in the left front fender-both are hardly noticeable- just don't want any surprises---everything works--I would not be afraid to drive this car anyplace-only reason I am parting with it is I got a convertible-thanks for looking!!!!!!

It is for sale locally-I reserve the right to delete this ad at anytime.

This is a no reserve auction!