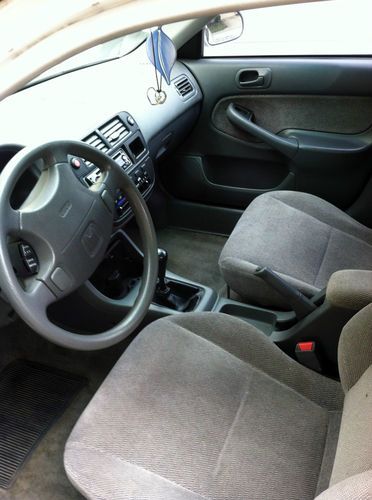 Condition: UsedA vehicle is considered used if it has been registered and issued a title. Used vehicles have had at least one previous owner. The condition of the exterior, interior and engine can vary depending on the vehicle's history. See the seller's listing for full details and description of any imperfections.Seller Notes:"Has a few dings on exterior along with a small amount of rust on drivers side door. As shown in pictures."

This car is in perfect running condition, no repairs needed. Newer tires and maintenance up to date. Interior is in good condition. Smooth clutch and shifter. WONDERFUL gas saver! If it weren't for needing the extra space for my little one, I would not be selling this car- I will miss the 35 miles to the gallon this car gets. Lower mileage for being a 97!

I was involved in a fender bender in February where I was rear ended on an off ramp. It was not serious, but had the car towed due to wanting to ride with my 1 year old daughter in the ambulance to be checked out. There was no serious damage other than the small dent and crack by the right side brake light (as shown in pictures).