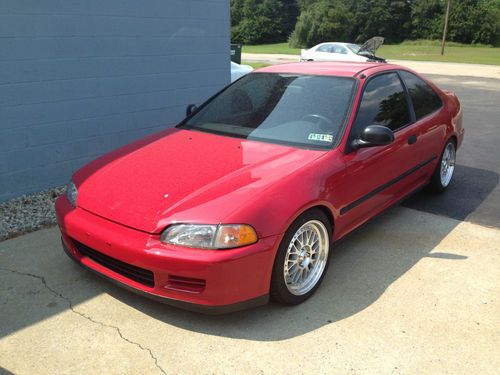 Condition: UsedA vehicle is considered used if it has been registered and issued a title. Used vehicles have had at least one previous owner. The condition of the exterior, interior and engine can vary depending on the vehicle's history. See the seller's listing for full details and description of any imperfections.Seller Notes:"dose need new suspension.."
This is a clean honda civic just completed two moths ago. k20a3 motor with plenty on aftermarket parts, new paint, and wheels and tires.
engine- k20a3 5 speed.
skunk2- intake manifold, shift knob, throttle body, headers and cat back exhaust.
K-tunned- wire harness, fuel rail & injectors, fuel pressure regulator, alternator bracket, shifter cables, and shifter.
k pro- ecu
hasport k mout kit.
compt tech clutch and fly wheel.
rims- 16 konig and falke tires.
all new parts, im sure im missing things. paint and body work was just done also. i have over 6000$ in parts alone, not including price of labor, paint, car, and motor.. this is a great deal.. i was in process of building a k24/20 street car. but ran out of money so i had a spare k20a3 motor and put that in and decided to sell the car.. i just need the money.. my loss is you gain!!