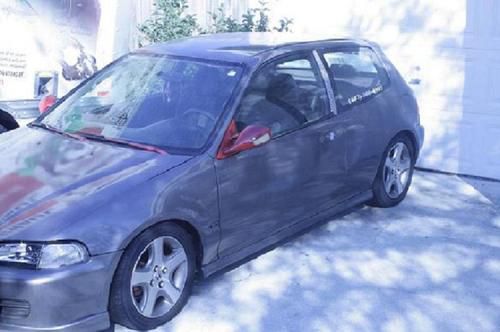 Up for sale 1994 HONDA  CIVIC EG CX hatch back with a JDM H22 motor with approx 75k miles mated to a USDM H23 5 speed transmission that shifts perfectly no pop outs no scratching.
This car has 4 wheel disc brakes from a 1996 Acura Integra,
2.5 inch header back exhaust.
light weight flywheel.
aluminum radiator.
fresh paint,
new shocks.
This car will need the air condition to be worked on if you want cold air, the evaporator was flushed and the expansion valve replaced, the lines were sealed after. There is no condenser or compressor but the wires are all there and the heat works.
This car has been a blast to drive, I have driven it from Florida to Ohio and back. and has seen a few trips between Orlando and Fort Lauderdale, the car is dependable and does 13.6 in the 1/4 mile. engine is stock and has never had any power adders (ie. nitrous oxide, turbo/super chargers). feel free to message me for any further info. Thank you for viewing my listing. PS. If you buy this car YOU are responsible for picking up your car. Shipping is your responsibility.