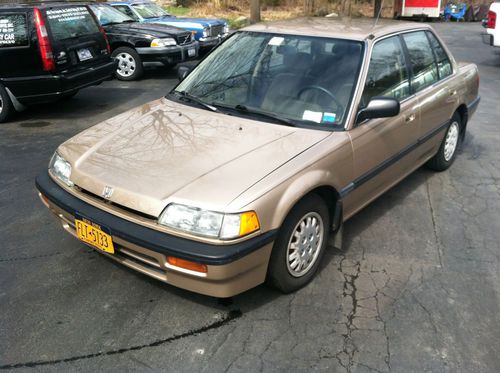 This 1989 Honda Civic LX needs a new head gasket.  The body and interior are in excellent condition.  I am the second owner.  The first owner sold it to me two years ago. I was surprised by the excellent condition of the car.  It was kept in indoor storage for ten years while the first owner worked overseas.   I purchased it for my daughter to use at college. She no longer needs the car, and I would prefer to sell the car at this time rather than fix it.  It could be an excellent get-around-town car for someone willing to fix the head gasket.

I put a new exhaust system on the car, and I had the air-conditioning serviced and retro-fitted with modern equipment.  The tires are in excellent shape, with about 10000 miles on them.
I will not ship.  Buyer must pick up the car and pay in cash or with cashier's check.