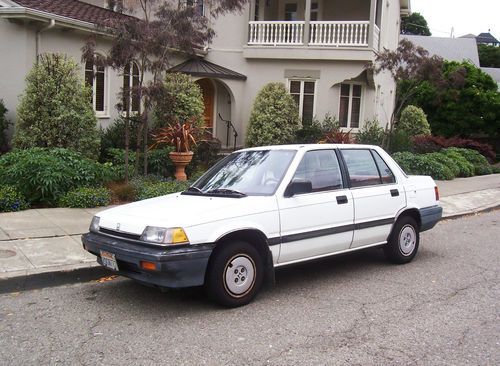 Condition: UsedA vehicle is considered used if it has been registered and issued a title. Used vehicles have had at least one previous owner. The condition of the exterior, interior and engine can vary depending on the vehicle's history. See the seller's listing for full details and description of any imperfections.Seller Notes:"I purchased this car new and maintained it in good working condition. Currently it needs a new water pump and can be driven only for short distances. Recently I had new battery put it and alternator replaced. There are a few minor nicks on the ceiling. The upholstery is in very good condition, except wear to the driver's seat, as seen on photo. The body of the car is in very good condition, except for few very minor dents that are hardly noticeable. There is discoloration of some parts, but no chips to the paint and no damage to glass. The car has never been in any major accident, and it runs well."

I described the condition of my car to the best of my ability.  I think that for it's age it looks great and works well.  I purchased this car new, took care of it,  and enjoyed driving it all these years.  However I cannot guarantee it's condition in the future,  and am selling it "AS IS".  Please do not hesitate to ask any questions before bidding.  Buyer will be responsible for vehicle pick-up or shipping.   Full payment is expected within 3 days after the auction.