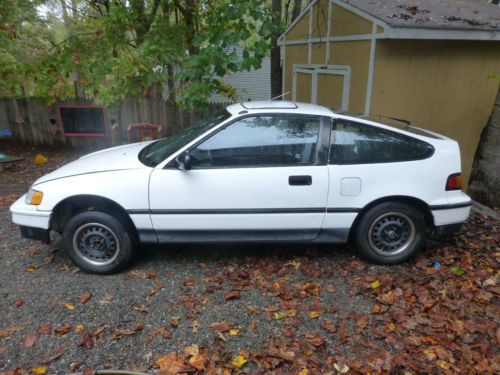 Up for sale is a clean 1990 Honda CRX Si shell it is 100 % stock unmodified. THERE IS NO MOTOR WITH THE CAR BUT I HAVE A 80,000 mile D16Y7 SWAP FOR EXTRA!!! The car has no quarter panel rust or major body damage. There is a dent on the passenger side rear body see pictures and surface rust on the roof also shown in pictures. The interior is clean only missing a few rear interior pieces and front seats to be complete. The drivers window doesn't work it will need a regulator to be functional again. The car has a lot of potential this car restored will bring over $5000 on a bad day...CRX's are hard to find with no quarter panel rust and stock. I had big plans with this car but need to sell to finish other projects. I can also deliver the car for a fee it is located in Va, 22968. Email if interested.