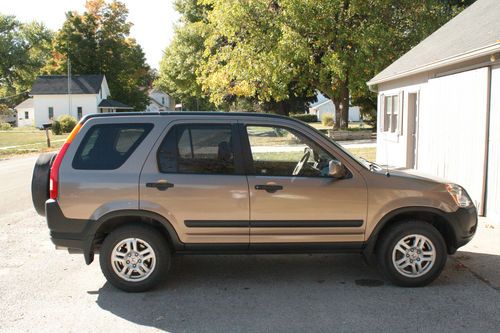 Condition: Used: A vehicle is considered used if it has been registered and issued a title. Used vehicles have had at least one previous owner. The condition of the exterior, interior and engine can vary depending on the vehicle's history. See the seller's listing for full details and description of any imperfections. ...
2003 Honda CRV EX AWD
Great running vehicle served us well for the last 6 years.  It has 183700 miles. At 181692 miles we had it serviced with a Honda certified mechanic. He changed oil and filter, changed transmission fluid, changed rear differential fluid, changed spark plugs, rotated tires, readjusted valve clearances, and replaced cabin filter. The left rear brake caliper was replaced and both rotors on the rear were resurfaced and break pads were replaced.  Two Sets of Keys with fob.  This car has a timing chain not a timing belt so you don't have to worry about having it changed.  There is a dent and scuff on the driver side back door from some unknown person in a parking lot.  There is a dent and scuff behind passenger side back door also from some unknown person in a parking lot. The clear coat has started to peel off just below the passenger side window.  Feel free to email any questions.  Or come see it in person and test drive it.  The car is located in Wayland Iowa.  This car is sold as-is and I have explained the condition the best to my knowledge.  No reserve listing.