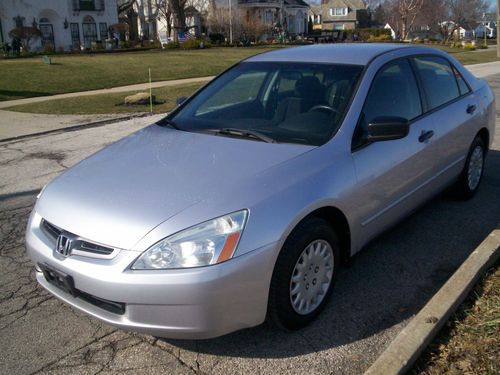 Condition: Used: A vehicle is considered used if it has been registered and issued a title. Used vehicles have had at least one previous owner. The condition of the exterior, interior and engine can vary depending on the vehicle's history. See the seller's listing for full details and description of any imperfections. ...
UP FOR SALE IS A 2005 HONDA ACCORD LX AUTOMATIC WITH 183000 HIGHWAY MILES. IT'S VERY CLEAN INSIDE AND OUT WITH NO SCRATCHES. THE WINDSHIELD AND THE FRONT BUMPER HAVE SMALL CRACKS.
ONE OWNER CLEAN CARFAX NEWER BRAKES AND TIRES, RUNS PERFECT WITH NO ISSUES, THIS CAR IS READY TO GO!!! BELOW BLUE BOOK.

WINNING BIDDER IS TO MAKE A $300 DEPOSIT THROUGH PAYPAL WITHIN 48 HOURS OF AUCTION ENDING.