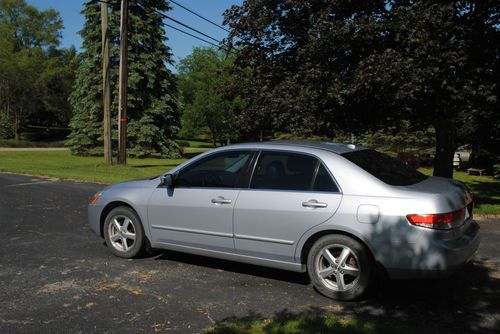 We are selling our beloved 2004 Honda Accord (EX with leather seats/front seats have seat warmers). I must say, we really don't want to, but we have a new member in the family and find that we need something a little bigger. We purchased this vehicle new from the dealership and have cared for it since it's purchase. This car runs great, and looks great. The car is 9 years old, and has several small door dings, which I tried to include with the pictures, but they are so small I don't know if they can be seen. There is also a small crack in the front bumper, from when a car in front of us kicked up a small metal plate. It didn't puncture the bumper, but did crack it. If it were not so cold out when it happened, I don't think it would of cracked at all. The car handles great in the winter and in the rain. It is fully loaded (with the exception of a navigation system). Here is the history of our car.

Several years (I believe 2006) after we purchased the vehicle, the head liner began to sag in the bag seat. The car was taken back to the dealership for repair. After the repair, we found they had dripped glue on the rear seat and the seatbelt straps, which faded the color. Of course we took it back for repair, which they fixed (I believe they died the material to match).

In roughly 2009, we had approx. 65000 mile on the car. While driving to work, the engine began making a funny noise. I pulled over and had it towed to our repair shop. We learned that we had a piston seized. Needless to say we were upset. We had the oil changed every 5,000 miles. Come to find out (we believe), the place we were having it done was using recycled oil. The business that had been doing our oil changes went out of business.  We had to decide what to do, rebuild the engine or replace the engine. We decide that replacing the engine was the best choice. We purchased an engine that had about 47,000 miles on it. We have had no issues since then. We have the oil changed every 5,000 miles and use synthetic oil.

We put a new battery in roughly March of 2012, and had new brake/rotors in 2012. The oil was just changed 2 weeks ago. I just had the tires rotated this week at the Goodyear Center (the tires are Goodyear Assurance, P205/60R16). I have the paper work showing the tires have 7/32" tread (which they said was about 70% tread left). While washing the car, I saw that there was a small paint chip on the lower left front bumper. I bought some touch up paint and touched it up. You can barely see it. I also touched up several small stone chip on the hood and bumper.

The last issue we have had is the airbag light has came on several times, then goes off. I have taken it in to the dealer twice to have them figure it out. And of course the light turns off, so they can not read the code. Last week, while it was on, I researched this on-line. On a forum it suggested that I buckle the driver seatbelt before starting the car, and if the light goes off, then it has something to do with the seatbelt. It also said that if you unbuckle the seatbelt while it is running, and the light comes back on, it is a faulty seatbelt. So I tried this, and sure enough the light went off and back on when unbuckled. I headed to the dealership to have it fixed. And of course, the light is back off so they can not code it. I have been told by several people to not try to repair the system myself, it is easy to cause more damage. And frankly it is something I wouldn't want to try and fix myself. I have been assured by several people that if the airbag light is off, that the airbag will deploy when needed. If the light comes back on prior to selling it, I will again try and get it to the dealership for repair. The forum I read stated that there is a federal mandate for lifetime warranty of seatbelts.

I may have to use this vehicle a few times until it is sold, so the mileage will be a little higher, but no more then 250 miles. You are welcome to have the vehicle inspected, and you can test drive the vehicle. The dealership offer we had was STUPID, and they told me  "to be honest you can get more if you sell it yourself". Please know this is a used car, 9 years old. There is no warranty, and is sold as is. But remember this is the flagship for Honda, and after all it is a HONDA. I will assist with having it shipped, which will be the buyer responsibility to arrange. I will work with the buyer if they decide to fly in and drive it home. I would not hesitate to drive this car to South America. We average about 26 mpg (combine city/highway).

The car comes with 2 sets of keys/key pads, and the valet key. The car has a remote start installed, and we have 2 remote starts pads as well. Please ask any questions. A $500 deposit is requested within 48 hrs. after close of auction. Deliver/possession can be made after funds have cleared the bank. We have a clear Michigan title. We reserve the right to end the auction early, due to vehicle be available for sale locally. Please do not send funds FED EX or UPS. I will only except payment by (if certified check is mailed)  the United States Postal Service, which helps protect the buyer and seller.

I have the car at the dealership and they have ordered the parts to fix the problem, which was the seatbelt. Will be ready tomorrow. Also the sunroof is a power operated moonroof.