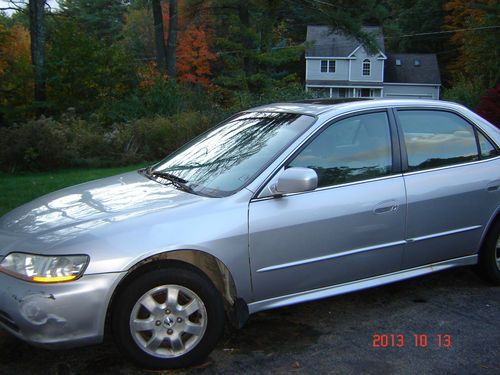 Condition: UsedA vehicle is considered used if it has been registered and issued a title. Used vehicles have had at least one previous owner. The condition of the exterior, interior and engine can vary depending on the vehicle's history. See the seller's listing for full details and description of any imperfections.Seller Notes:"For Parts or repair"

Selling 2001 Honda Accord Manual Transmission for parts or repair.

Car ran OK up until a few weeks a go when the brake lines going to the rear rusted and gave way.  I don't want to fix and want to sell as is.  Car has been well maintained and this would be an easy fix for someone who wants to fix it.
Tires are new, with one tire worn on edge
Battery is new
Struts and springs were replaced at 245,000
Timing belt was replace at 245,000
Engine runs good, burns a little oil, have to add a quart or so between oil changes
Clutch is good, but probably worn, but could probably go another 50,000
Alternator whines through radio recently may need to be replaced also.
Body is in pretty good shape with rust in the rear wheel wells and scratches and dent typical for a car of this age
Front bumper is dented and has cut marks
Has Alpine CDA-9886 with Infinity and Morel speakers
Car would need to be towed as break lines to rear are rusted and leaked the fluid.
Price is reflecting that the car would need tow and needs some work.