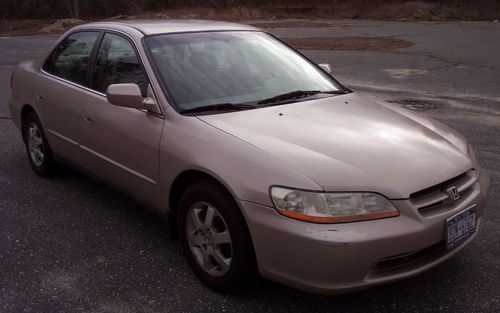 Up for auction...a 2000 Honda Accord SE, 4 door automatic with 128K miles.  The engine is a 4 cyl VTEC and it runs great. The transmission shifts perfectly.  This car is a one owner vehicle.  It was senior owned and she has since given up driving.  It was serviced by Honda on a regular basis.  The timing belt was replaced at 79K miles.  It has many new parts including tie rod ends, all bushings, CV joints and more.  There are no leaks.  No check engine lights - will pass inspection with flying colors.  Mechanically very sound.

The interior is cloth and shows very minor wear in the front.  The rear looks brand new.  It is equipped with full power - windows, locks, cruise, etc.  Everything works.  The A/C blows ice cold.

It has an alarm with remote.  It also has LoJack Theft Recovery System.

The body is in nice condition for a 2000, showing normal wear and tear on the bumpers - slight bumper rash.  The 4 matching Michelin tires are in very good shape with 90+% tread life remaining.

Overall, the car is very nice.  It has been impeccably maintained and can be driven with confidence.  If you have any questions, please feel free to contact me.  Thanks for looking and good luck.