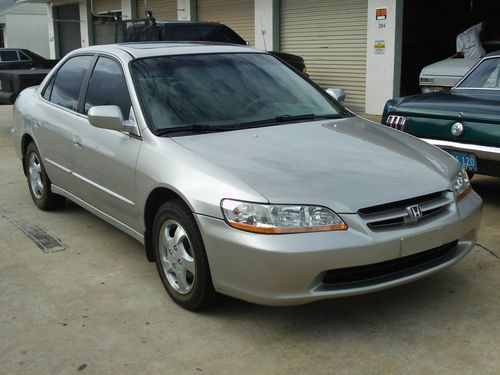 Condition: UsedA vehicle is considered used if it has been registered and issued a title. Used vehicles have had at least one previous owner. The condition of the exterior, interior and engine can vary depending on the vehicle's history. See the seller's listing for full details and description of any imperfections.Seller Notes:"THIS IS A NICE CLEAN VEHICLE NO MAJOR DENTS, PAINT HAS SOME WEAR SPOTS INTERIOR IS CLEAN NO RIPS, FLOOR MATS ARE GOOD, TIRES ARE GOOD, SPARE IS GOOD JACK IS INCLUDED, ALL POWER SEATS WINDOWS LOCKS WORK, SUN ROOF WORKS, A/C WORKS, RUNS GREAT"
1999 HONDA EX ACCORD

THIS IS A WELL CARED FOR VEHICLE THAT IS CLEAN

MILEAGE IS LISTED AS 99,999
THE ODOMETER IS HARD TO READ SOME OF THE
LIGHTS FOR THE NUMBERS ARE NOT LIT UP
I THINK THE MILEAGE IS ABOUT 98,000
SEE THE ODOMETER PICTURE

THE VEHICLE IS LOCATED IN SEBASTIAN FL 32958

LEAVE A MESSAGE IF I DO NOT ANSWER

ASK ANY QUESTION BY EMAIL OR PHONE