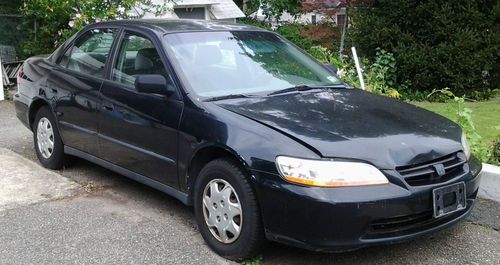 Condition: UsedA vehicle is considered used if it has been registered and issued a title. Used vehicles have had at least one previous owner. The condition of the exterior, interior and engine can vary depending on the vehicle's history. See the seller's listing for full details and description of any imperfections.Seller Notes:"ORIGINAL OWNER. Never hit hard. All damage shown in pics, no bodywork. SOLD IN AS IS CONDITION.Must pick up by tow truck within 10 days in Eastchester NY 10709. HAVE CLEAR TITLE.Just under 200K miles, transmission blown, no battery, hasn't run in 18 months. Prior to that, it ran well.Sold in as is condition, for parts only."

ORIGINAL OWNER. Never hit hard. All damage shown in pics, no bodywork. SOLD IN AS IS CONDITION.
Must pick up by tow truck within 10 days of funds clearing in Eastchester NY 10709. Checks will clear in 10 business days, USPS Postal money orders good as cash. HAVE CLEAR TITLE.
Just under 200K miles, transmission blown, no battery, hasn't run in 18 months. Prior to that, it ran well.
Sold in as is condition, for parts only.