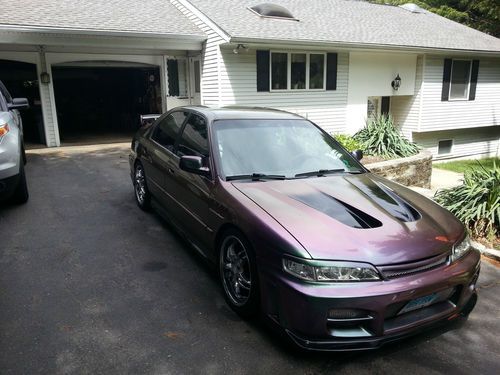 HERE IS A 1996 HONDA ACCORD 4DR AUTOMATIC WITH ONLY 98K ON THE CLOCK.  IT IS A CUSTOM VEHICLE WITH TOO MUCH TO LIST.  IT HAS FRONT LAMBO DOORS, CUSTOM CHROME ILLUSION PAINT, CUSTOM WHEELS, BUMPERS, GAUGES AND STEREO SYSTEM.  THERE IS SOME MINOR DAMAGE ON THE FRONT BUMPER.  THE A/C COMPRESSOR CLUTCH JUST FROZE UP LAST MONTH AND PUT THE A/C ELIMINATOR PULLEY ON.  IT NEEDS AN A/C COMPRESSOR.  THE CAR RUNS AND DRIVES GREAT.  I AM LISTING THIS VEHICLE FOR A FRIEND OF MINE AND WILL TRY TO ANSWER ANY QUESTIONS YOU MAY HAVE.  CLEAN TITLE IN HAND AND GARAGE KEPT.