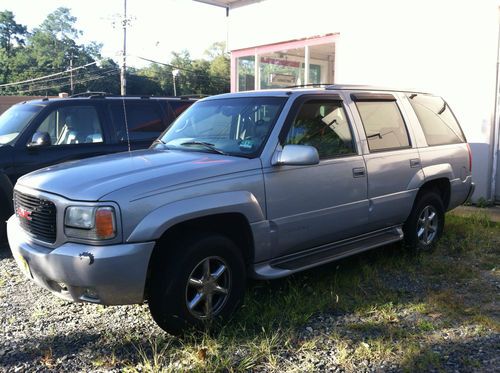 Condition: UsedA vehicle is considered used if it has been registered and issued a title. Used vehicles have had at least one previous owner. The condition of the exterior, interior and engine can vary depending on the vehicle's history. See the seller's listing for full details and description of any imperfections.Seller Notes:"Center Console not secure sometimes pops open. Interior has some wear. Tear in drivers seat. Paint missing left front bumper. General wear and tear from use. No damage from Hurricane Sandy. Purchased this 1999 Yukon Denali from mechanic who put a newer engine in with approximately 60,000 miles on it for his own use. We have owned for approximately one year and now want to sell. Odometer reads 208,289. Sold as is."

Purchased this 1999 Yukon Denali from mechanic who put a newer engine in with approximately 60,000 miles on it for his own use. We have owned for approximately one year and now want to sell. Odometer reads 208,289. Newer tires. Sold as is.