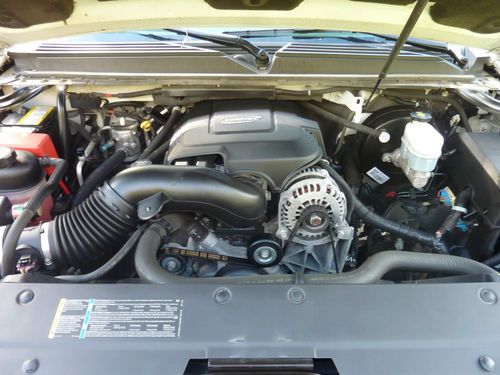 Condition: Used: A vehicle is considered used if it has been registered and issued a title. Used vehicles have had at least one previous owner. The condition of the exterior, interior and engine can vary depending on the vehicle's history. See the seller's listing for full details and description of any imperfections. ...
I'm selling this vehicle for a friend of mine. Her husband past away and so she had to transfer the title over to her name. They purchased the vehicle back in 2007 and they've only used it to drive to Idaho and Utah to visit family. So all miles were put on the freeway. You will be the second owner of this vehicle.
Vehicle was rear ended at a parking lot under 8 mph. Other vehicle hit the denali's trailer hitch. It was repaired at Auburn Chevrolet. Rear bumper was never touched. The cover for the trailer hitch was the only part replaced.
2007 White  Denali with tan leather interior, V8 6.2L AWD 84,160miles. LOADED!
Seats 7 passengers total. All miles are highway miles. Has 4 bucket seats, two in front and two in second row all four are heated seats, third row seating, heated steering wheel, Privacy Glass, One Touch moon-roof, rear back up sensors, running boards,  Wood grain interior, even comes with it's own Air Compressor for leveling the load. This SUV is Immaculate on the inside with touch buttons on the steering column and On Star, XM radio and Single CD. Cruise, Tilt, AC. Bose sound system.Fog lights, Heated  , Rain sensing wipers, One touch driver window, parking sensors, and Auto start Services Done: All up to date from dealership. paper work comes with the car. New tires installed recently. 98% tread left to go!!. CLEAN TITLE!
Exterior is 9.5 out of 10. Typical rock chips from freeway driving and interior is 9.5 out of 10 with no tears or fading nor cracks. Drivers seat like new. Third row seats were never used. They were wrapped and stored away. So they are new!!.Best feature: The passengers in the back have their own thermostat controls as well as radio controls and DVD player, Just in some headphones and listen to whatever station you want while riding in the backseat. The leather seats are ultra comfy and the back seats fold down for additional storage.
Remote auto start is also a huge plus. Cold out / Hot out...start your vehicle from inside the house and drive away once it has warmed/cooled up/down.
Willing to pick up at airport If you decide to drive the vehicle home. It will come with a full tank of Chevron 89 octane fuel.