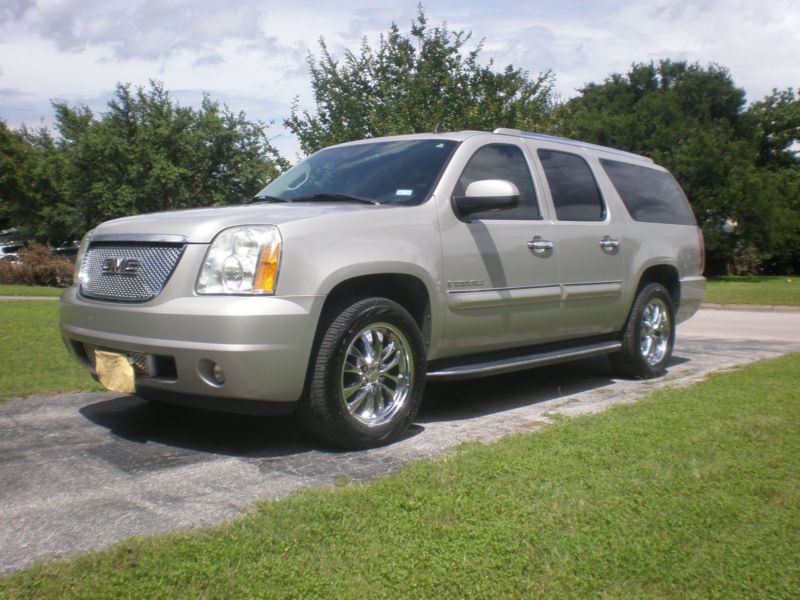 If you have questions email email me at: allieaeeisley@1me.net .

For sale is a 2007 GMC Yukon XL Denali. I am the second owner of this vehicle and I have owned it since Oct 2009.
89600 original miles. It has been a great vehicle for me but I don't use it that much. Features include:
-Vortec 6.2L V-8 motor
-6-speed automatic transmission
-All wheel drive
-4-wheel disc brakes.
-20" chrome rims
-Remote starter
-Power locks and windows
-Heated leather seating (Front and second row seats)
-Back up camera
-Running boards
-Towing package
-Power lift gate
This Denali has the split 60-40 second row power release seats. No captain's chairs. Fits one more passenger.
Removable 3rd row seats.
It has the Navigation system with AM/FM CD MP3. The CD player does not work. The nav system works but it could use
a new nav CD. I still have the original one. Premium Bose Centerpoint Surround Sound acoustic system.
The previous owner installed a headrest DVD entertainment system. It works well but the DVD player on the passenger
side will not play back DVD's. The driver's side works ok and will play on both monitors.
The tires were replaced in July 2014. Probably less than 5000 mi on them. New rear brake pads and rotors installed
May 2016.
The Denali has a few issues that I would like to point out:
-The self-leveling rear shock system is not working. The compressor is out and the shocks need to be replaced.
-There is a scrape/dent on the front passenger side of the bumper. (Some idiot hit me in a parking lot - see photo)
-The side impact strips on the passenger side have come off. I still have the parts but I have not had time to put
them back on.
-The chrome is peeling on the front passenger inside door handle.
-The button to release the rear gate glass has come out. I still have the button but the seal that holds it in
needs to be replaced. The glass will still release by pushing the button on the key fob.
-There are two cracks in the dash.
-The passenger mirror is loose, possibly bad retraction mechanism.
The Denali is located in Marble Falls, Central Texas. Clear Texas title. Current Texas registration and inspection
good through Oct, 2016. I will be happy to answer any questions and provide more photos. Thank you for looking and
best regards. Chris.