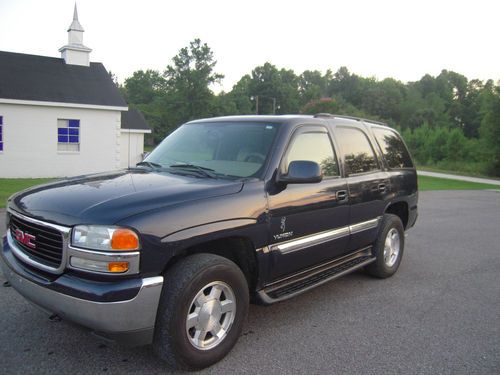 Condition: UsedA vehicle is considered used if it has been registered and issued a title. Used vehicles have had at least one previous owner. The condition of the exterior, interior and engine can vary depending on the vehicle's history. See the seller's listing for full details and description of any imperfections.Seller Notes:"There is slight damage to the front driver side door and finder as seen in the pictures where the wind caught the door and pulled it open to hard."

Very Clean GMC Yukon SLE 4X4, 157000 miles with dual exhaust . Seats 8, CD player, dual air control, caption seats in front. Leather interior with a removable third row seating. Has a complete Premium BOSE speaker system and has a rear seat radio that operates by head phones. All maintenance is up to date and vehicle runs very well with no problems. There is slight damage to the front driver side door and finder as seen in the pictures where the wind caught the door and pulled it open to hard