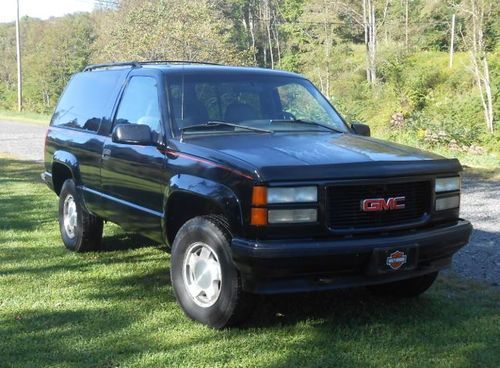 Condition: UsedA vehicle is considered used if it has been registered and issued a title. Used vehicles have had at least one previous owner. The condition of the exterior, interior and engine can vary depending on the vehicle's history. See the seller's listing for full details and description of any imperfections.Seller Notes:"Very original Yukon GT. Black with grey leather interior. The GT came from North Carolina nine years ago to the mountains of West Virginia. It has been a second vehicle and daily driver, always garaged. The GT had 170,000 miles when purchased. The original motor was completely rebuilt with new radiator and water pump, at 225,000 mile. It now has 285,000. The paint is seven years old and in fair condition. Both front fenders are stock replacements and some minor surface rust on the frame. Interior is worn and some tears to the upper driver and passenger seats. The rear seat has some tears. Headliner is just ok. The mag wheels are original and very worn. Carfax shows fender bender back in North Carolina. Original radio cassette player. The only modification from stock is the dual exhaust and air cleaner. It took me five Years to find a five speed Yukon GT. This GT truck may be the only one for sale in the US with factory five speed. Perfect GT for restoration or to drive as is."

Truck originally a North Carolina lease, then one other owner, then sold to me. Purchased in 2004 in North Carolina.
Pay Pal Preferred, or other arrangements can be made. $1,000 deposit upon winning bid. Delivery within 500 miles negotiable. Payment in full before delivery or pickup.