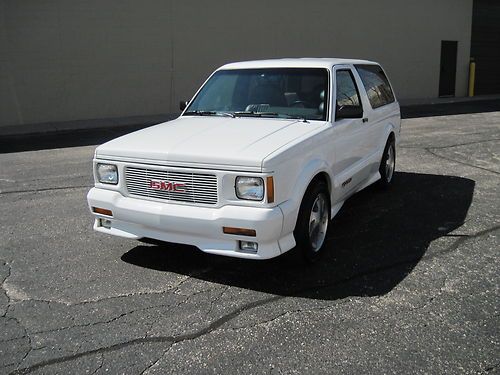 The GMC Typhoon is a high-performance version of the GMC Jimmy SUV. Produced in 1992 and 1993, the Typhoon was based on the 1991 GMC Jimmy SUV.

Both the GMC Syclone and Typhoon trucks featured a Mitsubishi TD06-17C/8 cm2 turbocharger and Garrett Water/Air intercooler attached to a 4.3 L LB4 V6 intake manifolds, fuel system, exhaust manifolds, and a 48mm twin-bore throttle body from the 5.7 L GM Small-Block engine. All Syclones and Typhoons had a 4L60 4-speed automatic transmission and a BorgWarner 1372 (Syclone)/4472 (Typhoon) transfer case splitting torque with 35% forward and 65% to the rear wheels. Both trucks featured all-wheel drive, upgraded brakes, and sport modifications to the standard suspensions. Unlike the Syclone, the Typhoon featured an air-operated self-leveling rear suspension. Output was officially 280 hp (209 kW) and 360 lb·ft (488 N·m), but some stock Typhoons have been measured at over 300 hp (224 kW) on a dynamometer.[citation needed]

The Typhoon was capable of accelerating from 0-60 mph in 5.3 seconds and could do a quarter-mile run in 14.1 seconds at 95 mph (153 km/h). Car and Driver compared the Syclone's performance favorably to the Ferrari 348ts, Chevrolet Corvette, and Nissan 300ZX Turbo. It cost US$29,970, though the magazine criticized the plasticy interior pieces.

All three trucks were built for GMC by Production Automotive Services of Troy, Michigan. Aside from a handful of prototypes, only 4,697 Typhoons were built by GMC: 2,497 in 1992, and 2,200 in 1993. Unlike regular production Syclones, Typhoons were offered in various color configurations that differed by year, with black/black being the most common.