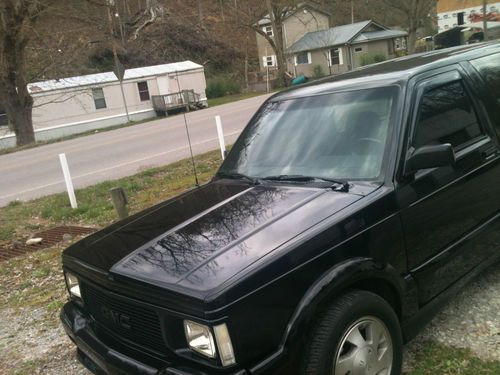 I am selling this 92 GMC Typhoon with only 60,864 miles on it. This is a one owner vehicle. It does have an oil leak at the rear of the engine. Also, the vehicle has been in an accident and has a rebuilt title. The vehicle was state inspected after it was repaired. As you can see from the pictures the repair shop did an excellent job of repairing the vehicle. I have listed the reserve low enough to take into consideration that the vehicle has been involved in an accident. After the vehicle was repaired the engine was completely taken apart and re-done by  local speed shop in order to increase the horsepower. The vehicle has appox 450 horsepower at the cost of almost 5,000 dollars. I have the receipts and you are welcome to call the speed shop and verify the information. You can call me at 606-631-8959 or email me at travler_55@Yahoo.com.