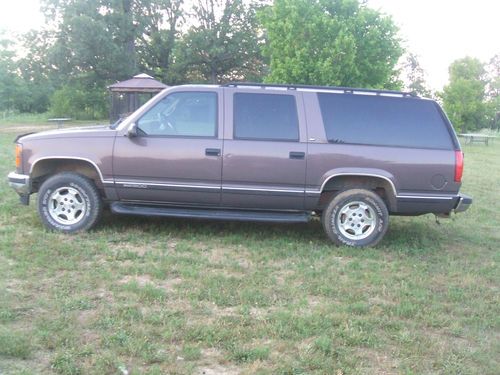 Condition: UsedA vehicle is considered used if it has been registered and issued a title. Used vehicles have had at least one previous owner. The condition of the exterior, interior and engine can vary depending on the vehicle's history. See the seller's listing for full details and description of any imperfections.Seller Notes:"Partial hail damage to hood, Front blower not working, Needs windshield and tires"

This suburban is a very solid vehicle with no rust. There are a few dings and minor hail damage. Last spring put $600 in the air conditioning and then shortly after the front bloower went out and we have not had that replaced. October 2012 spent $300 on front end repairs and replaced u joints. Vehicle is dependable and I would not be afraid to take it anywhere. IT currently needs tires, the windshied replaced, and as mentioned the front blower motor or switch needs repaired.