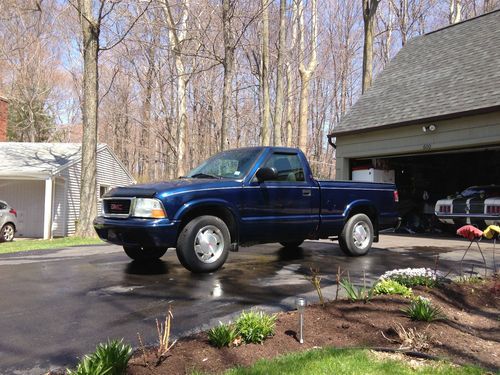 Condition: Used: A vehicle is considered used if it has been registered and issued a title. Used vehicles have had at least one previous owner. The condition of the exterior, interior and engine can vary depending on the vehicle's history. See the seller's listing for full details and description of any imperfections. ...
LOW RESERVE
hello im selling a 2002 GMC Sonoma in a great running condition. The truck is very clean in the inside and runs really good.the outside has some little scratches and some by the doors rust. ( can be easily fixed.)the truck has 103k miles on it!it has a V6 engine and is a 4.3Lit has a trunk/bed cover!! has a after market CD player in it!Great pick up truck for a great price!! KBB link: http://www.kbb.com/gmc/sonoma-regular-cab/2002-gmc-sonoma-regular-cab/short-bed/?pricetype=private-party&vehicleid=4126&intent=trade-in-sell&mileage=102000&options=159839%7ctrue%7c159830%7ctrue%7c159853%7ctrue%7c159847%7ctrue%7c159853%7ctrue%7c159930%7ctrue%7c160077%7ctrue#survey
LOW RESERVE
Please feel free to ask any questions!