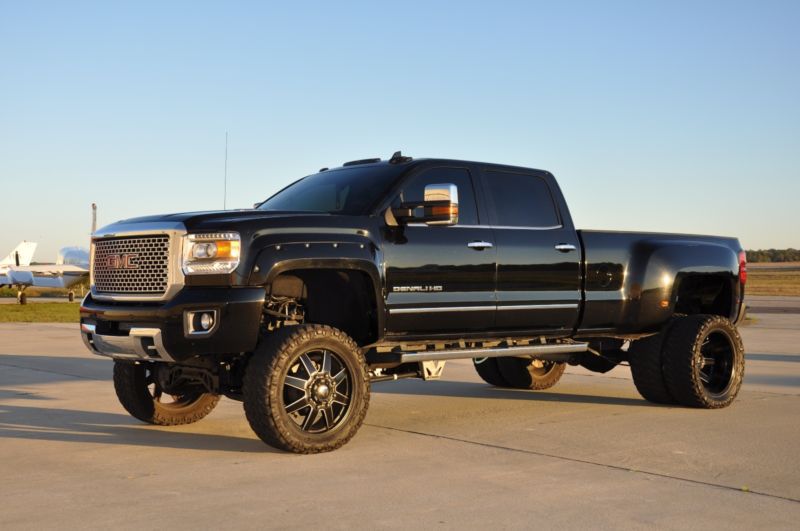 Just email me at: daniaarroyos@net-c.cat .

2015 GMC 3500 HD Denali
Lifted
Loaded
&
Ready to Roll
Up for sale today I have my husbands pride & joy... He built this last year when it was bought new July 2015. Only
selling as he was involved in a plane crash and can no longer get in and out of the truck. Please see list of extra
that have been done to this truck.. Truck was not detailed, cleaned washed before these photos. This is how the
truck is kept, the inside is perfect had weather floor mats since new, exterior is clean. I will have the truck
washed & waxed before the end of the sale.
Its the GMC 3500HD Denali so its loaded with every option you can think of. Leather, Heated & Cooled seats,
Sunroof, Power Everything, you name it & the truck has the option.
My husband had the truck lifted about 3 weeks after he bought it. 7in lift that can be adjusted to 9in if you
wanted to, Mcgaughy lift installed. New Fuel Maverick wheels installed 22's. Has 35in tires , no rubs, no fenders
or bumper trimmed. Would clear 37's if you wanted to go bigger. Tires have 53K miles on them , at least another 10K
left on the tires. Has Fender Flares on the front painted to match the truck. Really is a great looking truck ,
can't go anywhere without someone asking about it, taking photos, etc.
At about 9K miles my husband wasn't happy with the tow performance so he installed the following . PPEI EFI live
Tuner, AFE 5in exhaust with Muffler, S&B Air intake, Air Dog II 165 system.. Tuner has 4 programs, is not shift or
change on fly. Has been left on the 2nd tow tune since installed.
We had a oil consumption problem since day one, GM said that was normal and it would get better. Oil changes done
every 6500 miles the truck would be done 4 qt's. Well at 52K miles #1 piston oil ring failed. GM didn't warranty
the motor or do anything to help out. I installed a new motor at 52K miles and when installed I also removed the
CP4 that has been failing and installed the CP3 conversion. Installed all the emission deletes and PCV re route.
Truck is now ready to go and all the items that have been known to fail have been addressed.
So here's the build list
McGaughy 7-9in lift
Fuel 22in Wheels
Fender Flares Front
Trailer B&W Hide a Ball hitch system
Engine
PPEI EFI Live Kory Willis
5in AFE Exhaust System with 6in tip
S&B intake system
Air Dog 165 system
CP3 conversion system
EGR Delete
PCV re route
Intercooler Pipes
LB7 Down Pipe
Truck has been my husbands daily driver... It has pulled our ski boat maybe 2500 miles out of the 55K and guessing
another 10K miles pulling our camper etc. Was never used as a work truck, Never been smoked in...
Truck still has the factory plastic on the Nav unitme write the listing
Only selling because of his airplane crash. We need a stock height truck