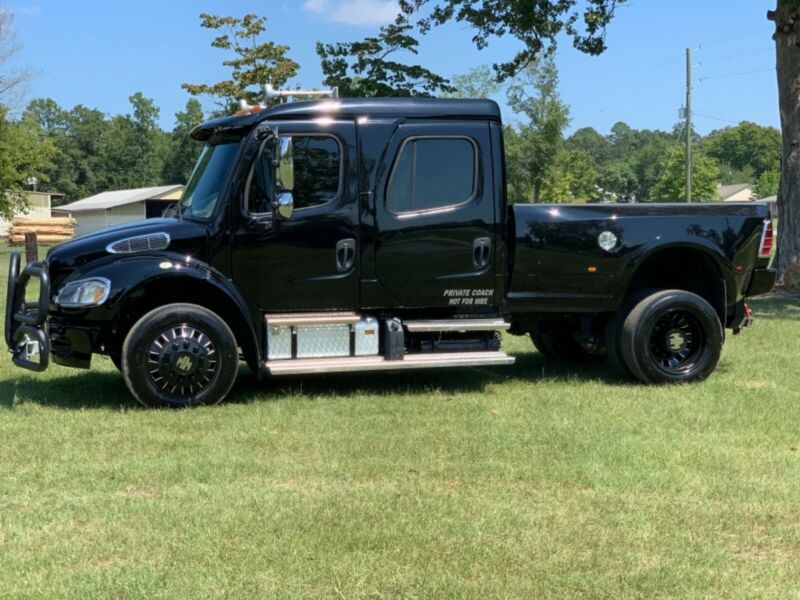 2014 freightliner m2-106 sport chassis custom built hauler, “this truck is not an actual sport chassis”,
Cummins isb 260hp, 110k miles, Allison auto transmission, air brakes, air ride front seats cab and rear end, power
windows locks and heated mirrors, new legacy black leather air ride front seats and rear seat slides into bed,
pioneer touch screen that features apple play with 2 10” subs and amp mounted under back seat, led headlights,
tinted windows, I left rubber floor liner in truck bc I actually use truck and didn’t wanna worry about tracking
dirt on carpet. I wanted something different so I went with a 2014 dodge dually bed but I didn’t like how they
sit so low on some trucks so it’s mounted on 12” channel so body line matches (even though I gave up gooseneck
doing it, it’s best looking mated up dually bed). They made a receiver plate below rear bumper with a stationary
pintle hook, a 2” receiver with the 7 blade plug in and also added air brake connections for heavy loads. The
polished wheels didn’t fit my mental image of truck so I went with 22.5” black mega mayhem wheels with brand
new sumitumo 255-70-22.5 tires. To just add a little more to the look I was going for I added an exGaurd front
bumper and had it sprayed in bedliner for durability. There was just enough chrome with the black to achieve what I
wanted. The train horns above the visor really stand out. Oh, I had to add the transformer emblem on tail gate! I
still use the truck frequently so miles will go up a little. ABS light has been on ever since I’ve had truck and
never had it scanned (it takes a different plug than obd). Everything works as it should and rides and drives good
but isn’t a Cadillac, this is as close to a semi as you can get! It has normal wear as far as some rock chips few
small dings and a couple scratches, as I stated we use this truck to pull! Truck is ready to take off hooked up to
a trailer and go anywhere!