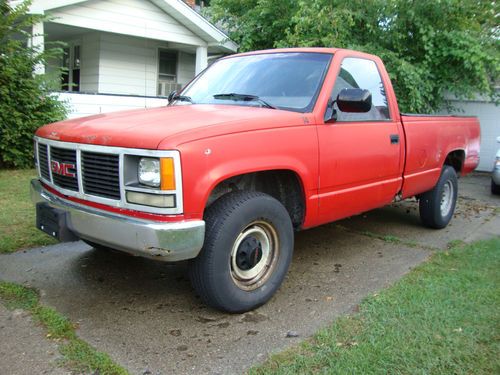 Condition: UsedA vehicle is considered used if it has been registered and issued a title. Used vehicles have had at least one previous owner. The condition of the exterior, interior and engine can vary depending on the vehicle's history. See the seller's listing for full details and description of any imperfections.Seller Notes:"3/4 ton pickup truck, two wheel drive, automatic, like Chevy / Chevrolet Cheyenne"

Up for sale is my trusted GMC Sierra pickup truck.  NO RESERVE.  I bought the truck as a work/beater truck for household/yard jobs but it turns out I seldom drive it so here it is for sale.  The previous owner had this truck in a fleet as evidenced by the dirt embedded into the interior despite my best efforts to remove it.  The mileage is uknown (which is why the listing showns 999,999).  The odometer has never turned since I purchased the truck in 2010. The engine runs strong and has been trouble free since I purchased it.   If you are looking for a basic and inexpensive work truck that you don't need to worry about putting to work and scraping it up, this one fits the bill!

This truck is relatively unique in that it has very few options. It is not equipped with a/c - hence the blank out plates on the vents on the dash.  Instead the truck has pull-stops to open fresh-air vents below the dash.

Radio with cassette player (non-functioning - I don't know why)

Starts the first time, every time

Tires still have a lot of tread depth on them

The mileage of the truck is unknown.  It reads a bit over 112,000 miles, but it was reading this when I bought the truck in the summer of 2010 and the reading has never changed.

Transmission leaks a little bit of fluid - I assume it needs a new gasket but I have never attempted to replace/repair it.

Radio and cassette player do not work (turns on, but no sound)

Tears in the seat cushion

Spare tire and jack are both missing

Please contact me if you are interested in coming to check the truck out.  The truck is no longer currently registered as I just transferred plates to another vehicle so test drives will have to be limited to the side-streets in my neighborhood.

Here is the not-so-fine print:

Vehicle is sold 'AS IS' with no warranty.

Vehicle must be picked up within 14 days of end of auction.

$100 deposit required within 48 hours of close of auction.

Any bidders with a feedback rating of less than 5 will be cancelled.