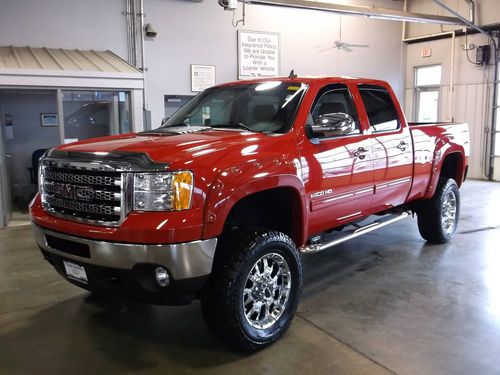 You are about to bid on a Brand New 2012 GMC Sierra 2500HD Crew Cab Diesel with the Rocky Ridge Conversion. This truck has never been titled before and comes with the full factory warranty of a 3 year 36,000 mile limited bumper to bumper and a 5 year 100,000 mile powertrain warranty from General Motors. This is a $12,000 conversion from Rocky Ridge. With the MSRP on the truck at $67,150 you are sure to get a great deal on this one. Here is a list of the Conversion and the Extra's this truck has on it.

This SLE is unique in many ways. From the custom Conversion that was installed right after the truck left the factory it includes a center console which is a more rare option on the SLE. It also has the Duramax Diesel under the hood which is a power house and will practically pull anything you put behind it. Plus it is paired up to the Allison Transmission which together will asure you many years of worry free driving.

This truck had an original MSRP of $55,150 and with the conversion you are at $67,150. To get to the $53,707 Buy it now Price that is taking all the applicable rebates from General Motors instead of the special financing option. If you would like more information on this please feel free to email me or give me a call. You are practicully getting the Conversion for Free with this deal.

A $500.00 Deposite is due within 48 hours of auction end and the reaminder is due 7 days after the end of the auction. We do have this truck listed locally and do reserve the right to end the auction early.