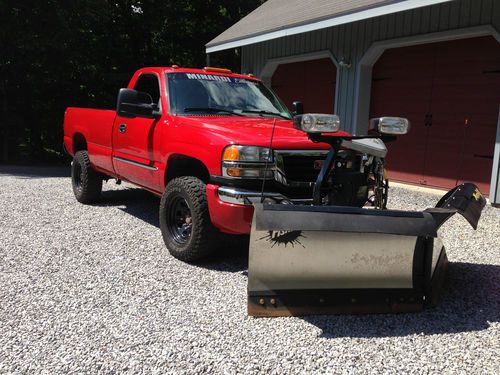 2007 GMC SIERRA 2500HD WITH 2011 FISHER EXTREME-V STAINLESS STEEL 8'6'' PLOW.  TRUCK HAS REBUILT-SALVAGE TITLE AND IS NEW YORK STATE CERTIFIED AND INSPECTED.  THIS TRUCK HAS A "REAL DIESEL" ENGINE, NO DPF FILTER OR UREA INJECTION, THIS IS THE LAST YEAR OF PRODUCTION BEFORE ALL EMISSION REGULATIONS.  IT HAS A 6.6L DURAMAX WITH A 6-SPEED ALLISON AUTOMATIC TRANSMISSION, AND IT RUNS AND SHIFTS PERFECTLY.  WITH LESS THEN 67,000 MILES THIS TRUCK IS BARELY BROKEN IN.

TIMBREN KIT IN REAR
ALONG WITH RIMS AND TIRES THAT ARE ON THE TRUCK, IT COMES WITH 1 SET FACTORY GM ALUMINUM WHEELS, NOT IN GREAT SHAPE AND 1 SET OF AMERICAN RACING ALUMINUM WHEELS.  BOTH SETS HAVE TIRES.
POWER DRIVER SEAT - POWER WINDOWS - POWER LOCKS - POWER AND HEATED TOW PACKAGE MIRRORS - CRUISE CONTROL - CD PLAYER - AIR CONDITIONING - HEAT.  ALL WORK GREAT!!
3'' DOWN PIPE TO 4'' DUAL EXHAUST SYSTEM WITH 6'' TIPS
FISHER PLOW IS LIKE BRAND NEW, HAS ORIGINAL CUT EDGE AND WAS ONLY USED FOR A HANDFUL OF STORMS, ALWAYS COVERED AND OILED/GREASED WHEN NOT IN USE.
LIKE SAID EARLIER, TRUCK HAS REBUILT - SALVAGE TITLE AND HAS ITS DINGS AND SCRATCHES (PASS. SIDE BED AND DOOR) BUT IT WILL START UP AND RUN PERFECT ON THE COLDEST DAY OF THE YEAR.
THIS IS NOT MY TRUCK, I AM LISTING IT FOR A VERY CLOSE FRIEND, IF YOU HAVE ANY QUESTIONS CALL CHRIS AT 845-742-8657, HE IS THE OWNER.  THANKS FOR LOOKING.