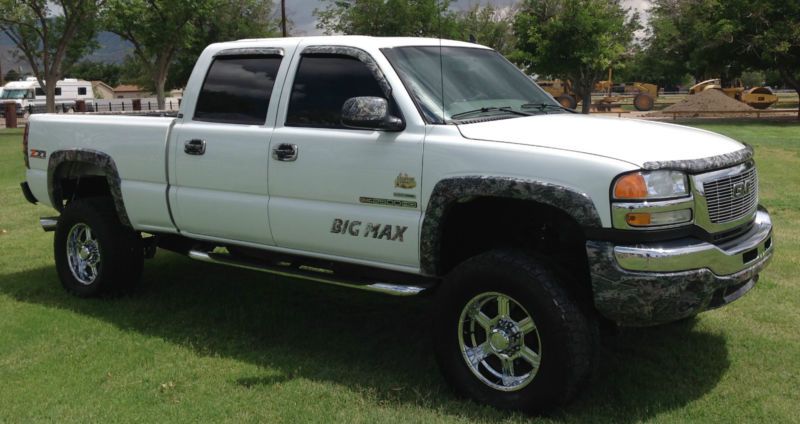 If you have any questions feel free to email me at: nolanmmannings@bigboys.net . "Big Max" is a Camouflage Edition of the 2007 GMC Sierra SLT Crew Cab ZR71 Diesel is very RARE and most likely a
one of a kind truck.
"Huntin The World Southern Style" was designed professionally and applied at the time of production, 4" lift
system, off road package.
"Big Max" truck can be a Work Horse with Power to Spare, Used Recreation-ally or as a Family Vehicle depending on
the owners needs. Both my wife and I truly enjoy driving and riding in this truck. We are selling this vehicle
because my back issues and age has made it more difficult to get in and out of of it easily.
"Big Max" with just under 500-hp (no chips), the Allison trannie the torque and power is almost unimaginable. (as
well as 19mpg highway)
"Big Max"commands a certain respect as it goes down the road, even from Semi's.
"Big Max"Always Turns Heads.
"Big Max" is a do everything AWESOME vehicle that still has a smooth ride. When riding in this vehicle a person
feels like they are on vacation - Great fun to be in.
As with all used vehicles, their may be a few nicks or scuffs - that's to be expected especially from these size
tires.
The Condition of "Big Max" A+ (9 out of 10 cosmetically and 10 out of 10 mechanically!)
This 6.6 Duramax TEAMED up with the Allison Transmission is just getting broke in.
Differentials, Transfer Case, Transmission and Engine all have Amsoil products.
The front end is nice and tight, suspension is good. The Allison shifts perfectly and has been well maintained.
You will not find a unique truck like this anywhere else.