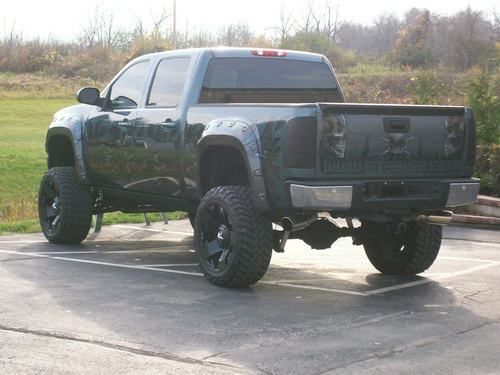 2007 GMC SIERRA W 2012 2500HD FRONT END. OVER $17K IN CUSTOM PAINT WITH ALL PPG PRODUCTS USED. CUSTOM MURAL ON HOOD AND TAILGATE. THERES TONS OF LAYERS AND REFLECTIVE PAINT THAT SHOWS AWESOME AT NIGHT. THE PAINT IS AWESOME, YOU WONT FIND A TAPE LINE ON THIS TRUCK! THE FRONT END ALONE WAS ABOUT $8K. TRUCK HAS 9 INCHES OF LIFT TOTAL A 6 INCH PRO COMP SUSPENSION LIFT WITH FULLY ADJUSTABLE ICON COIL OVERS AND A 3" BODY LIFT. ALL SAID AND DONE WITH THE COMPONENTS AND INSTALL THE LIFT WAS ABOUT 10 GRAND. IT HAS THE AMP RESEARCH AUTOMATIC RUNNING BOARDS, GO RECON HID PROJECTOR HEADLIGHTS AND PROFESIONALLY BLACKED OUT AND CLEARED TAILLIGHTS. IT HAS A FULLY RHINO LINED BED DONE OVER THE RAILS AND HAS ALSO BEEN RHINO LINED UNDERNEATH THE TRUCK ON THE FRAME RAILS. FULLY CHROMED OUT FRONT END WITH CUSTOM LIGHTS IN THE GRILL. IT HAS A FULL EXHAUST I BELIVE A MAGNAFLOW I CANT REMEMBER FOR CERTAIN. I JUST ADDED A NEW VOLANT COLD AIR INTAKE. I ALSO JUST ADDED A BRAND NEW VIPER REMOTE START AND ALARM. ITS THE NICEST ONE THEY MAKE WITH THE LCD KEY FOB. I ALSO JUST DID A FULL AUDIO AND VIDEO SYSTEM THRU THE ENTIRE TRUCK WITH TOP OF THE LINE AUDIOPHILE GRADE STUFF. EVERYTHING WAS PULLED OUT OF THE TRUCK AND IT WAS SOUNDPROOFED WITH MULTIPLE LAYERS OF RAAM MAT BY RAAM AUDIO. THE SPEAKERS ARE IMAGE DYNAMICS WITH 6.5 COMPONENTS UP FRONT AND 6.5 COAXIALS IN THE REAR. I HAD A CUSTOM BOX MADE BY SUPERCREWSOUND TO FIT THE TRUCK BUT ALSO TO THE EXACT OPTIMUM SPECS OF THE 12' IMAGE DYNAMICS IDMAXV3 SUB. IT HAS TWO 7" SAVV HEADREST DVD PLAYERS THEY ARE TOP OF THE LINE AND NOT THE WALMART CRAP. I DIDNT LIKE THE MATERIAL ON THEM SO I HAD THEM WRAPPED TO MATCH PERFECTLY. IT HAS A BRAND NEW PIONEER AVHP4400BH DOUBLE DIN TOUCHSCREEN DVD HEADUNIT AND AN ALPINE PDXV9 5 CHANNEL DIGITAL AMPLIFIER. I USED ALL TOP OF THE LINE MONSTER CABLES TO PREVENT NOISE AND INTERFERENCE. I ALSO ADDED BLUE LEDS TO ALL THE FLOORBOARDS TO ADD A LITTLE LIGHT AT NIGHT BUT IT IS ON A SWITCH. IT ALSO HAS A COBRA RADAR DETECTOR THATS BRAND NEW AND NEVER GETS USED THAT IS HARD WIRED AND TUCKED IN FOR A CLEAN LOOK. CANT REMEMBER THE MODEL # BUT ITS THE TOUCHSCREEN. IT ALSO HAS A BRAND NEW REAR BACKUP CAMERA AS WELL. THE TRUCK IS AN SLT TO BEGIN WITH AND IS ABSOLUTELY LOADED TO BEGIN WITH. ITS ALL LEATHER IN PRISTINE CONDITION NO SMOKERS OR PETS ALLOWED INSIDE! IT HAS WOODGRAIN, HEATED SEATS, SUNROOF, POWER EVERYTHING, YOU NAME IT AND ITS IN THERE. THE WHEELS AND TIRES ARE 35" NITTO TRAIL GRAPPLERS AND THE WHEELS ARE CUSTOM MADE ROCKSTARS, THEY ARE THE MATTE BLACK BUT THEY ARE 22X14 AND THEY ARE ONLY MADE TO THE GENERAL PUBLIC UP TO 12' WIDE IS WHAT I WAS TOLD. THEY ARE IN LIKE NEW CONDITION AND HAVE NO SCRATCHES OR ROAD RASH OF ANY KIND. THE TRUCK WAS USED IN A PHOTO SHOOT FOR THE REAL WORLD LAS VEGAS AND I GET ATTENTION AND STARES EVERYWHERE I GO. THIS TRUCK DRAWS A CROWD AT EVERY GAS STATION I GO TO. MY ONLY REASON FOR SELLING IS THE FACT THAT IM BUYING A 5TH WHEEL AND I NEED A DIESEL TO PULL IT. I WILL LOOK AT TRADES FOR A NICE NEWER LOW MILEAGE CREW CAB 4X4 DIESEL AS WELL. THERES EVERY BIT OF $70K IN THIS TRUCK AND IT DRIVES LIKE A GEM. THIS WHOLE TRUCK WAS PROFESSIONALLY BUILT AND IT DRIVES LIKE A STOCK TRUCK. I KNOW IVE LEFT OUT DETAILS ON THE TRUCK BECAUSE ITS JUST TOO MUCH TO REMEMBER. IM FROM TENNESSEE BUT IN NEW JERSEY ON A PIPELINE PROJECT SO NO NEED FOR WORRY ABOUT SALT EXPOSURE. I WOULD NEVER DRIVE THIS THING IN BAD WEATHER. I HAVE NO TIME FOR SPAMMERS OR SCAMMERS. IF YOU HAVE CASH IM READY TO MAKE SOMEONE A GREAT DEAL BECAUSE IM WAITING TO SELL IT BEFORE I GET THE 5TH WHEEL I NEED FOR TRAVELING. THE TRUCK HAS A CLEAN TITLE IN MY HAND AND NO I DONT HAVE A WIFE TO ANSWER TO. I ALSO HAVE CASH ON MY END IF YOU HAVE A NICE DIESEL THAT I LIKE. ABSOLUTELY NO 6.0 POWERSTROKES OR REBUILT TITLES WILL BE CONSIDERED..