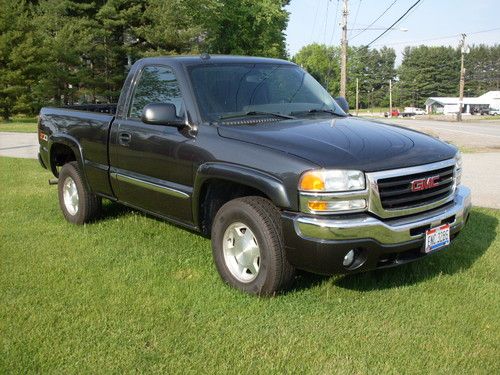 Condition: Used: A vehicle is considered used if it has been registered and issued a title. Used vehicles have had at least one previous owner. The condition of the exterior, interior and engine can vary depending on the vehicle's history. See the seller's listing for full details and description of any imperfections. ...
2004 GMC Sierra 1500 Z71 4WD

One owner, clean title, no accidents, no stories.  This truck has been my daily driver since I purchased it new, and has been
a great truck for me.  The new owner will be getting a fine vehicle!  I am listing this truck with NO RESERVE, but it is
for sale locally, so I reserve the right to cancel the auction at any time.

Overall, this truck is in very nice shape.  There are the normal wear issues and small dings that you would expect in a
vehicle of this mileage, but no mechanical problems.  I have used the truck a few times to pull a motorcycle trailer, and used
it for some yard work (hauling branches around, etc...), but I have never abused it or used it as a plow truck.

Please feel free to ask any questions before bidding.  I would encourage you to come view the truck in person
or take it for a test drive, just contact me to set up a time.

Thank you for looking and good luck!