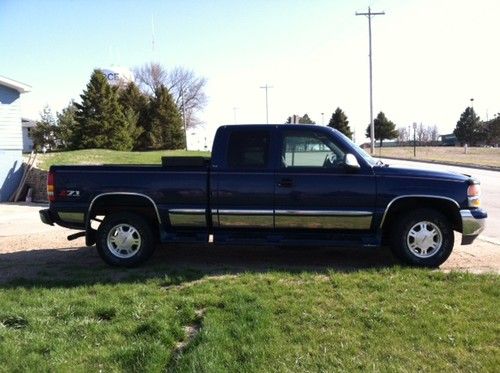 Condition: UsedA vehicle is considered used if it has been registered and issued a title. Used vehicles have had at least one previous owner. The condition of the exterior, interior and engine can vary depending on the vehicle's history. See the seller's listing for full details and description of any imperfections.Seller Notes:"rust over rear wheel wells, slight rust in cab corners. minor scratches. no major dents or scratches. needs tires."

VERY, VERY nice truck.
EXTERIOR:
Some rust over rear wheel wells.  minor rust in cab corners.  (see photos)  Blue paint is shiny, not faded.  No hail damage.  Comes with toolbox, molded fiberglass running boards, splash guards, etc.  tires will need replaced soon.  Note:  there is no bed liner.  bed has some scratches, but not what you would expect for a truck this age that has no liner.
INTERIOR:
near flawless.  seats, headliner is near mint.  buttons and lights all look great.  very, very clean interior.
MECHANICAL:
engine runs perfect, uses no oil.  tranny shifts good, firm, on point.  4x4 shifts perfect, low range shifts in and out as it should.  A/C blows very cold.  comes with an unused spare tire.  143,600 miles.
This is a very nice truck, drives great, quiet, smooth.  low miles for the year.  Would not be afraid to drive this truck cross country.
This is a used truck with miles on it.  There is no warranty expressed or implied.  All I can state is how it has been for me, and how it is currently.  Have owned the truck for approx 4 yrs.  Have (more) twins on the way, so need the cash!
Thanks.