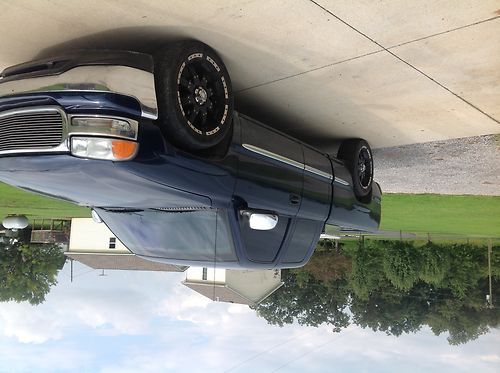 Condition: UsedA vehicle is considered used if it has been registered and issued a title. Used vehicles have had at least one previous owner. The condition of the exterior, interior and engine can vary depending on the vehicle's history. See the seller's listing for full details and description of any imperfections.Seller Notes:"Very nice truck for the money. No known mechanical issues. Interior is in great shape. New paint in last 6 months. Riding on 22" rims. Tires great shape. 3 are brand new other has about half tread left. Very sharp truck and runs very strong."

Very nice truck for the money. Runs very strong with no issues at all. New paint deep blue in color. Tan interior in excellent condition. Has 22" tires and rides very smooth. Has been lowered 2" all the way around. Flowmaster dual exhaust. Sounds sweet and low. Reese hitch on back with Kobalt truck box on bed. Miles are at 203k but mostly highway miles. I drive everyday to work 52 miles round trip. Excellent truck for money's and looks very sweet washed up. Custom grill and headlights. Blue neons all the way around the truck.