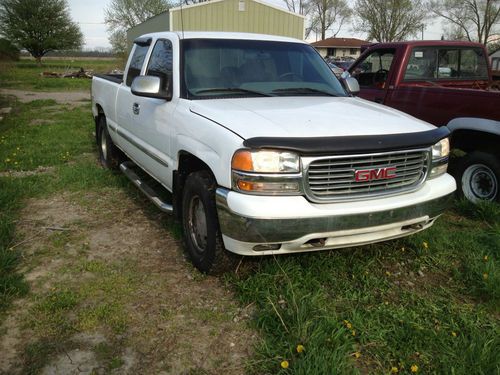 2000 GMC SIERRA 5.3 VORTEC 4WD Z71
VEHICLE PUT IN STORAGE ABOUT A YEAR AGO, 2-3 MONTHS AGO VEHICLE WAS VANDALIZED INSIDE AND OUT. ALMOST EVERY PANEL OUTSIDE WAS KEYED AND INSIDE SEATS AND SOME PANELS WERE STABBED WITH SHARP OBJECT. ALSO BLEACH WAS SPRAYED/THROWN THROUGHOUT INTERIOR. VEHICLE DID RUN AND DRIVE FINE PREVIOUS TO STORAGE. MOTOR HAS ABOUT 140K ON IT AND TRANS WAS REBUILT APPOX 10K AGO. TRUCK NOW HAS NO START, NO CLICK OR ANYTHING WHEN ATTEMPTING TO TURN KEY. DASH LIGHTS DO LIGHT UP WITH IGNITION JUST NO START. SOLD AS IS NO WARRANTY. HAD NO INSURANCE ON TRUCK WHILE IN STORAGE SO CUTTING MY LOSSES. I HAVE CLEAN AND CLEAR INDIANA TITLE IN HAND. SAME TRUCK STYLE FROM 1999-EARLY 07 TESTING WATERS HERE IF IT DOESN'T SELL WILL PROBALLY GO TO OTHER AUCTION OR PART OUT. AGAIN MUST BE TOWED AWAY DOES NOT START/RUN.
KEYWORDS
4X4 DURAMAX CHEVY CHEVROLET SALVAGE REBUILD SCRAP DEAL VORTEC GMC SIERRA