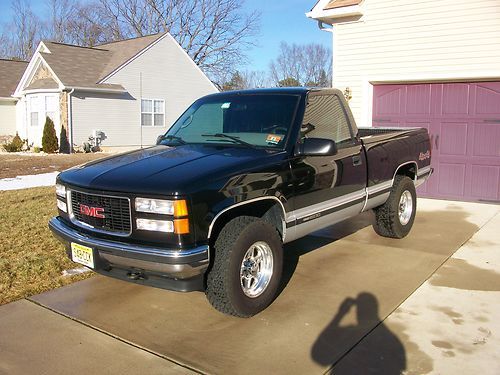 I am the second owner , I have the window sticker and owners manual.
The following parts have been replaced:
A/C compressor, drier,condenser,filter
Radiator, thermostat, all hoses
Alternator, battery, belt , belt tensioner
Spider injector assembly, fuel filter
Distributor cap and rotor, spark plugs, plug wires
K&N Air filter
3 inch stainless exhaust, new catalytic converter, stainless Magnaflow muffler and stainless Magnaflow tip
Front and Rear shocks
Upper and lower ball joints,tie rod ends,draglink
All fluids changed
Tires General Grabber AT2 LT 265/75/r16 Load Range E 10 ply less than 5k. Spare tire is original .
The truck is in great mechanical shape, the body is 95% rust free the only rust is on the bottom doors and the on bed ! There is a dent in the passenger side of bed, there are misc small dings and chips in the paint and the paint on the hood and roof is spidered. See pics
The interior is clean the seats and center console are in great shape, the drivers door panel has some damage , the carpet is ok if I was keeping truck I would replace it. See pics
The windows are tinted.
Headlight assy are new with new bulbs
Turn signal assy are new with new bulbs
New Jersey State Inspection is good till 02/2015
The chrome on the rear bumper is flaking off.