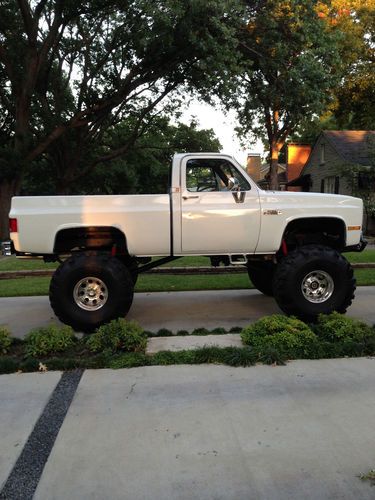 1984 GMC High Sierra. Here is a list of the frame off restoration that was done to the truck.

Brand New A/C System all ACDelco
Small block 400 with Vortec heads and a Holley 750 carbrator Only 6,000 miles on the engine
Lunati cam
Factory 4 speed manual
Gm Gov Lock
Warn locking hubs
1 Ton axles 8 lug with 4:10 gears
Rear axel skid plate guard
2 wheel drive steering box
Extended front drive shaft
Crossover steering
44"Super Swampers Tires only 3,000 miles on the tires
Mickey Thompson aluminum wheels
44/16.5/18.5
12,000lb Warn Winch
15" Lift 12"Springs and 3"Body
Frame has been sand blasted and sealed
Since restoration the truck has run Mobile 1 30 weight Full Synthetic.
This truck runs great with no issues and no leaks.
If you are looking at this truck you know you are not looking at junk.
Ed-214-284-0048
The truck is for sale locally so I reserve the right to end the auction.