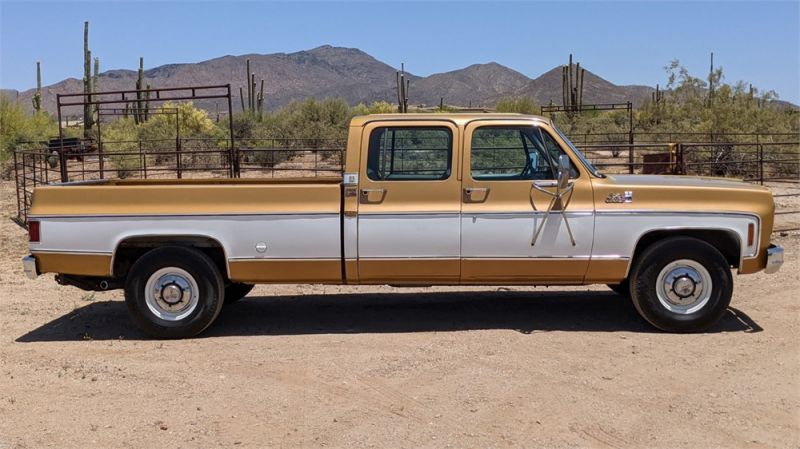 No call please. e-Mail : doctmoodsmontpers1972@gmx.net 1975 GMC Sierra Silverado crew-cab is a rust-free, all-original 2WD pickup that has covered just 25,652 miles since new and is powered by a numbers-matching big-block 454ci V8 paired with a 3-speed TH400 automatic transmission. . This Sierra is outfitted in heavy-duty equipment, offering an auxiliary fuel tank, tow mirrors, and a step bumper. This Sierra from that year is painted two-tone Gold (53) and White (12) and described as being highly original and rust-free, consistent with its low odometer reading and having spent time in the western region since new. The body is a four-door, fleetside, longbed layout, and the sliding rear window looks out to a lightly-used cargo area. . The headliner has been replaced, and other finishes are reported to be original throughout. Amenities include a tilt-adjustable steering wheel, woodgrain trim, map pockets in the doors, Soft Ray tinted glass, air conditioning, and a trailer brake control unit.The big-block 454ci V8 has been recently-serviced with a rebuilt four-barrel carburetor, an ignition tune-up, and the installation of a replacement exhaust system. This powerplant was factory rated at 230 horsepower and 350 lb-ft of torque when new. Power is fed to the rear wheels via a column-shifted TH400 3-speed automatic transmission and a locking 4.10:1 differential.