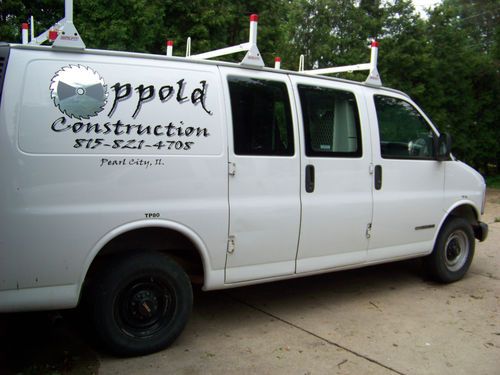 Condition: UsedA vehicle is considered used if it has been registered and issued a title. Used vehicles have had at least one previous owner. The condition of the exterior, interior and engine can vary depending on the vehicle's history. See the seller's listing for full details and description of any imperfections.Seller Notes:"130,955 miles. Great work vehicle and very dependable as it was maintained. 2nd owner. (1st owner was Com Ed). Updates to Vehicle within last year: 2 new batteries, new injection pump, 8 new bosch injecters, 8 new glow plugs, exterior rhino lined 12" up from bottom of vehicle all the way around vehicle. Includes Heavy duty 3 bar weather guard ladder racks, trailer brake controller, 7 pin light hook-up, & heavy duty hitch receiver. This vehicle has been very well nmaintained with oil, oil filters and air filters changed every 5,000 miles; fuel filter changed every 10,000 miles. Logos on the vehicle will be removed upon sale by the owner. For more info send me an email."