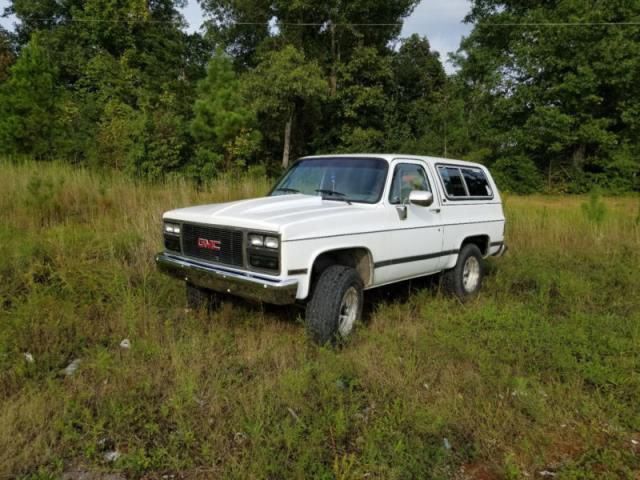 My eMail : MazieSzmalcftfc@yahoo.com This is a 1989 GMC Jimmy Sierra SLE I currently use as mydaily driver. It runs great and I would drive it anywhere. It has a fuelinjected 350 with a 700r aoutmatic transmission and a np241 transfer case. Thistruck is in amazing condition considering its age and I love it very much, itjust isn't practical for me because I need more space in the back, and Iwant something 2wd that I can throw a 383 in with a 5 speed manual transmission.Like a 80s suburban. There is no rust anywhere on this truck except for underthe battery and the tailgate. It has new paint. The motor has ZERO oil leaks dueto how little the mileage is on this truck. At some point someone put a b&mfloor shifter in it but if that is a issue for you a can get a new steeringcolum and put it in. The front windows will need new motors in them but thetailgate window motor works fine. The a/c works but it needs to be charged withR12. This truck only has 45,000 Original miles on it. The first owner had it upuntil two years ago and it was only used to haul his boat, which was not often,then a young man bought it and had wheels put on it and had it painted, but hewas afraid to drive it because he did not want to "mess it up". In January Ibought it and have driven it every day since then. I am very happy with it, butI want something that can get my blood pumping. Anyways thanks for looking