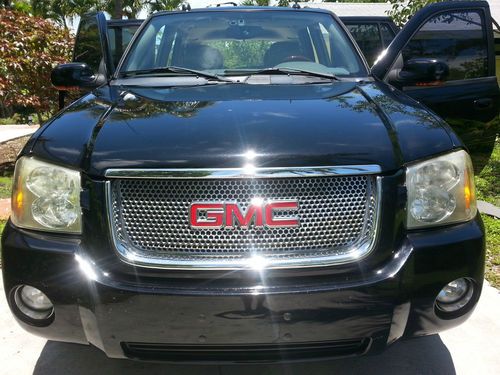 This is a mint 2005 Black GMC Envoy Denali. Everything works, the onlky issue was the air ride suspension just replaced for 1800. All of these trucks have the same problem after 90k miles the air-ride breaks down. This car is good for another 100k miles. loaded with everything navigation, sunroof , bose stereo, xm , cd, tinted windows, chrome wheels, electric leather seats, your own air pump. Wish I knew about the air ride when i bought it. Truck runs smooth. Last few pictures show minor bug damge on front bumper and drivers side mirror also the scratch on rear bumper. Beautiful truck  loaded with all options.This truck is carfax certified for buy backhttp://www.carfax.com/manifest/bbg/viewPrintCertificate.cfx?permutation=HTL_VHR_CIP&vin=1GKES63M752363767&make=GMC&model=ENVOY+DENALI&year=2005&engineInfo=+5.3L+V8++SFI&drivelineDescription=REAR+WHEEL+DRIVE&bodyTypeDescription=4+DOOR+WAGON%2FSPORT+UTILITY&coveragePeriod=11%2F19%2F2012+-+11%2F19%2F2013&tabbed=true, follow that link or google vin. 102,000 miles. serious buyers please.