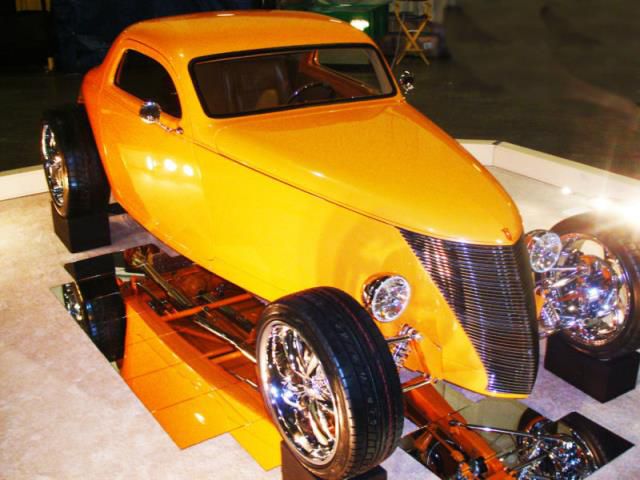 1937 Ford “Fenderless” Hot Rod This classic custom coupe is a collectors dream with well over $100K in it. This style hot rod was made on a 1937 Ford Chassis and it has a rare custom fiberglass body. It was made by arguably one of the best custom car builders in America, Tony Deluca. There is nothing out there like this car and it is in mint condition. It drives like new and is very well tuned. Every piece of metal on this car consists of chrome on this highly collectible car. It has been in storage its whole life and has never seen a drop of rain. The AC is ice cold and the car is very... very fast. Car Specifications - Oze Body - Oze frame -Kugel open wheel polished front suspension - Chromed rear 4 bar - 4 wheel Wilwood brakes - Polished stainless exhaust - 20"/18" Boss wheels - Polished stainless grill - Molded tailights - 300hp Chevy 350 with polished and chromed accessories - 700r4 tranny with chrome pan -Chrome torque convertor cover - Polished driveshaft - Aluminum rad - Spal 3000cfm fan - Chrome a/c compressor - Remote control doors and windows - Ice cold air conditioning - Dakota digital gauges - Wrap around dash -custom interior with wrap around seats and waterfall -high end 400 watt subwoofer stereo system -curved windshield -smoked tinted windows -German wool carpet -3 stage pearle orange paint -chrome steering column -interior color matched chrome steering wheel