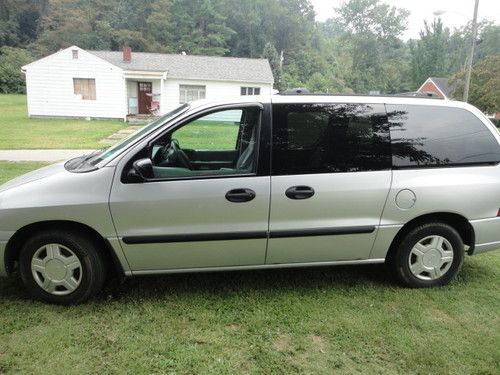 UP FOR AUCTION IS A 2002 FORD WINDSTAR 4 DOOR MINI VAN.  IT HAS A 3.8L V6 AND RUNS GREAT.  THERE IS 144207 MILES ON IT.  THE INTERIOR IS IN GOOD CLEAN CONDITION.  THE EXTERIOR LOOKS GREAT WITH THE TINTED WINDOWS.  THE AC AND HEAT WORK GREAT.  THIS WOULD MAKE A GREAT FAMILY VEHICLE.  PLEASE LOOK OVER ALL PICTURES AND I WILL BE HAPPY TO ANSWER ANY QUESTION.

BUYER IS RESPONSIBLE FOR PICK UP OR SHIPMENT OF THE VEHICLE.  THE VEHICLE STAYS AT LOCATION UNTIL FULL PAYMENT HAS BEEN RECEIVED.  AT END OF AUCTION THERE IS A $500 DEPOSIT REQUIRED WITHIN 48 HOURS.  THANK YOU FOR YOUR INTEREST AND HAPPY BIDDING.