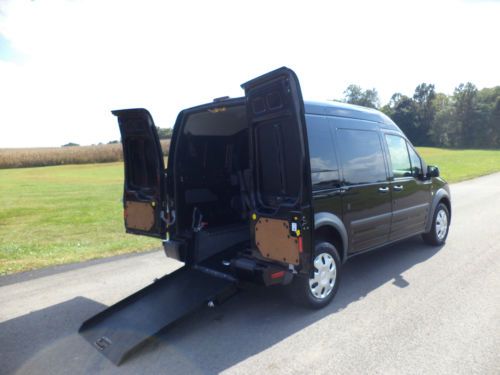 Condition: UsedA vehicle is considered used if it has been registered and issued a title. Used vehicles have had at least one previous owner. The condition of the exterior, interior and engine can vary depending on the vehicle's history. See the seller's listing for full details and description of any imperfections.Seller Notes:"GREAT CONDITION WITH NEW WHEELCHAIR CONVERSION"

UP FOR SALE IS A 2012 FORD TRANSIT CONNECT WHEELCHAIR/HANDICAP RAMP VAN. THIS VAN HAS THE ATS ADVANTAGE RE LOWERED FLOOR REAR ENTRY CONVERSION. THE VAN HAS THE TWO PIECE, NON SKID, ADA COMPLIANT RAMP WITH THE DUAL PISTON SHOCK ASSIST SYSTEM. THE VAN HAS THE Q-STRAINT WHEELCHAIR RESTRAINT SYSTEM WHICH INCLUDES FOUR RETRACTABLE WHEELCHAIR STRAPS AND FULL BELT SYSTEM. EVERYTHING NEEDED TO TRANSPORT ONE WHEELCHAIR IS INCLUDED. THE VAN HAS A THREE YEAR WARRANTY ON THE CONVERSION AND THE VAN IS STILL UNDER FORD FACTORY WARRANTY ALSO. THE RAMP IS MANUAL WITH A DUAL PISTON SHOCK ASSIST SYSTEM WHICH MAKES STOWING AND DEPLOYING SIMPLE.  THE VAN IS ADA COMPLIANT AND CAN BE USED FOR COMMERCIAL APPLICATIONS. THE VAN RUNS AND DRIVES GREAT WITH NO KNOWN ISSUES. THE INTERIOR IS WELL KEPT IN GREAT CONDITION. THE EXTERIOR ALSO IS IN GOOD CONDITION WITH NORMAL WEAR. WE CAN FIANANCE THIS UNIT TO BUYERS WITH APPROVED CREDIT BUT BUYER MUST CALL FOR CREDIT CHECK AND APPROVAL.  PLEASE HAVE ALL FUNDS SECURED BEFORE BUYING AND BE READY TO MAKE THE 500.00 NON REFUNDABLE DEPOSIT WITHIN 24 HOURS OF AUCTION ENDING.WE ALSO CAN SHIP UNIT ANYWHERE AT BUYERS EXPENSE BUT UNIT MUST BE PAID IN FULL BEFORE IT SHIPS. WE CAN DELIVER VANS TO THE NASHVILLE TN AND LOUISVILLE KY AIRPORTS FOR BUYER ALSO. FOR QUESTIONS EMAIL OR CALL ROB @ 270 634 1466 OR RON @ 270 634 0721. THANKS